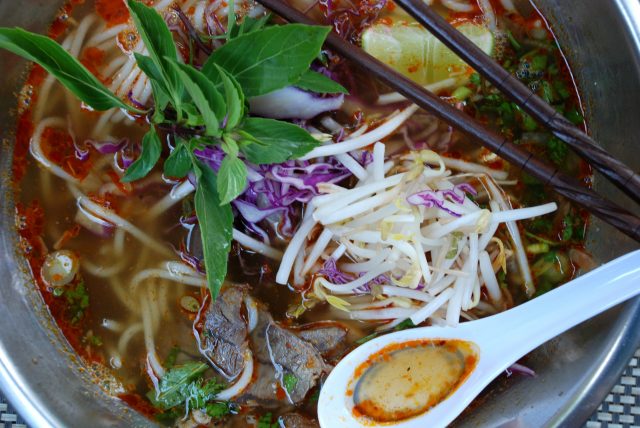 It’s clearly counter-intuitive, but eating hot soup – and spicy hot soup at that – on a hot day has the unintended salutary effect of cooling you down. Even if it doesn’t, a soup like Bún Bò Huế is too good to skip.

The spicy noodle soup (“bun” is rice vermicelli; “bo” is beef) made in the style of the central Vietnamese city of Hue, until the end of World War II the nation’s capital, dates to what is known as the Nguyen Dynasty. The food of the city is, for the most part, the food of Emperors.

Kitchener is blessed with and continues to support a growing number of restaurants that serve pho (noodle soup) and other Vietnamese and Thai dishes such as bun bo Hue. Pho Tran has a full menu of curry dishes, vermicelli bowls, fried rice dishes, vegetarian dishes and bubble teas in a sleek, casual dining room.

The bún bò Huế, which is under $10, is delicious in that it combines both beef and pork in a rich beef-based broth to which is added lemongrass, the tough, fibrous Asian grass that is lemon scented, and a spicy shrimp paste.

Aside from the broth, bologna-like pork sausage combines with slices of flank steak, tender with small bits of fat, to provide the dish’s meat component. In the traditional preparation, the shrimp paste – known as mam ruoc – is fermented for added flavour, but Pho Tran says theirs in not fermented.

The unique part of the dish – and the ingredient that adds another layer of flavour – is a cube or two of pork blood “pudding” with its soft, silken texture that is much like the texture of tofu. It therefore adds a texture contrast as well as a slight iron flavour.

The noodle in Pho Tran’s bun bo Hue is a thicker rice noodle. Don’t be shy about gathering up your chopsticks and spoon and slurping away loudly. That process of aeration as you suck the noodles up makes sure they are coated with the broth, and the inspiration process of drawing in air helps create a full, rich flavour.

The soup is then garnished with sprigs of fresh, aromatic basil, crisp, clean-tasting mung bean sprouts, culantro (what’s also called sawtooth coriander) and finely shredded red cabbage for a lot of crunch. All of that is set off by giving it a good healthy squeeze of fresh lime.

The foods of the east are especially notable for their use and balance of sweet, salty, sour, bitter and that rich. meathy mouthfeel of umami. That’s what makes these types of dishes so fabulous; they both feed your hunger and your soul.