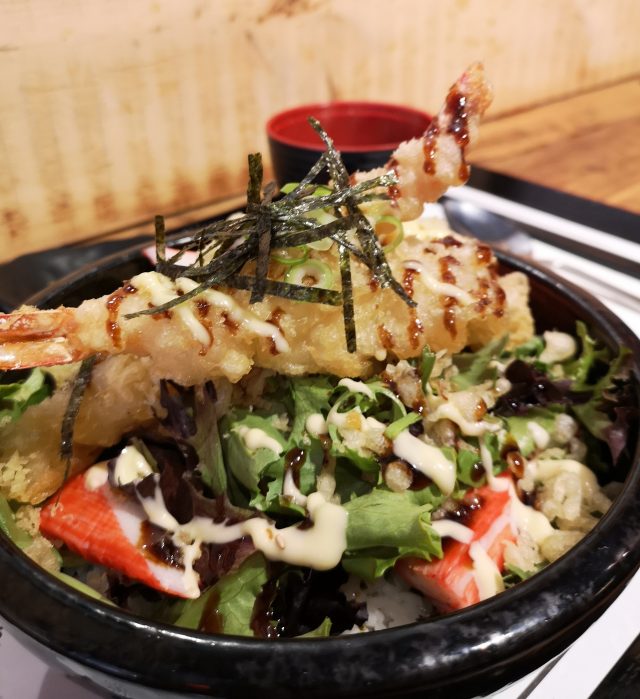 At the centre of owner Chris Lee’s restaurant is a wood pergola, which is known as a yatai. It’s a replica, of sorts, of a Japanese mobile food stall that is wheeled out, erected and opened to serve customers before shutting down and being wheeled off again in early morning hours.

Lee says simply that he’s enamoured of food in the outdoors.

“I love to eat outside, and I want this to feel like outside,” Lee told me.

Surrounding the yatai, there’s a forest of wood: wood tables, wood benches, wood chairs. The other stimuli include a tin-design ceiling, flags and banners and interesting and engaging bric-à-brac and curios.

There are lanterns emblazoned with “Ramen” in large black lettering but also the kitschy “live laugh love”-style posters that extol the virtues of wine, for instance, and a re-production of the Eisenstaedt sailor-kiss.

Staff will greet you from 15 metres away asking for the number in your party and directing you to a table – or to the yatai where you can sit opposite your companions, or beside.

Juxtaposed to it all is a Japanese Zen-style garden taking up most of one corner of the restaurant; when it’s very busy on Friday and Saturday, Lee could likely use that space for a table or two.

Izna is a vibrant venue that captures the chattery spirit of an izakaya: I admit I love that chatter and freneticism, but I like the food, too, at Izna.

The appetizer menu includes at once vegetarian japchae and takoyaki deep-fried octopus. There are two dozen donburi rice bowls, about a dozen noodle dishes as well as a blend of classic Japanese dishes like okonomiyaki pancake and Korean dishes such as galbi on sizzling cast iron.

There is both sake and soju, the latter the Korean distilled beverage; interestingly, you can also order a schooner of beer.

“This food is my history,” he says referring to his 12 years as a cook and restaurateur having owned other restaurants. Korean, Japanese or Chinese, each item has been tweaked and re-imagined from former menus. “I love fusion food,” Lee says.

Among the donburi selections, there is kabuto don ($14.95). It takes its name from the Japanese samurai helmet, the image of which Lee has captured in two large and wonderfully crisp tempura-battered shrimp that he mounts on top of the bowl.

The base is delicious and gently tangy sushi rice on which is layered fine slices of avocado, a couple of pieces of crab, an assortment of mixed greens, crispy shards of fried batter and house-made kewpie-style mayonnaise slightly thicker and slightly sweeter than Hellman’s. A punch of flavour is by virtue of furikake, a seasoning rich in umami. Nori tops it all off.

Like its bowl-of-food cousins Korean bibimbap and Vietnamese bun cha gio, donburi is a satisfying rice “salad” (in a way a salad can rarely satisfy). Mix it up or eat the individual components: either way, it’s delicious and filling.

In the yatai, on the tray replete with a place mat advertising the best dish for your astrological sign, you’ll find side dishes of pickled Korean radish, some kimchi and an excellent miso soup with cabbage: the urban cacophony, real or imagined, subsides as you dig in, the warm rice doing its soothing work.

Izna is open Monday to Saturday for lunch and dinner.

I’ve become interested in Indian cuisine, including cooking some dishes at home. It’s a way to try some different techniques […]

[Previously published in The Kitchener Post.] Chicken, generally, can be a humdrum affair, especially the white meat—and even if it’s […]

Roots, tubers and bulbs – much of what we might refer to as fall or “winter” vegetables – have long […]

If you ask Elena Sopt what dish you should have at Simply Delicious, you can’t finish the question before she […]

There are times when simplicity dictates. When all you want is a quick, wholesome bite that isn’t fussy and complicated […]

This Friday is the Local Community Food Centre (LCFC), foragers’ and Hunters’ Banquet: it’s an annual fall event that supports […]

Both in the culinary world and here in Waterloo Region, Detroit-style pizza is relatively little known. But, holy smokes, is […]

I ate at Restaurant L’Express on Rue Saint-Denis in the Plateau area of Montreal a few years ago: if I […]

The popular breakfast Eggs Benedict is a unique, sort of self-reflexive dish: it’s essentially eggs with an egg sauce. And […]

A culinary institution since 1930, Harmony Lunch  in Uptown Waterloo has seen a rejuvenation and refurbishment since Fat Sparrow Group […]

I always snicker slightly (but silently) when ordering fettuccine or spaghetti “alla puttanesca” at a restaurant: it translates as “prostitute’s […]

I once received a phone call from a reader in Gadshill, just north of Stratford, who was curious about a […]

At one time, the website of Kitchener’s Downtown Business Improvement Area listed 20 coffee outlets in the city’s central business […]

I do enjoy a bowl of congee in cooler weather, and I enjoy as much exploring the different textures and […]

It’s a suitably porky time of the year while we are in the full throes of Oktoberfest, so here’s a […]

Hey! Ya gotta book today! Me, Relish Cooking Studio and MP Tours are headin’ out into the wilds of Oxford […]

Thanks to local baker and food entrepreneur, Aura Hertzog, I discovered the kouign-amann a few years ago. It’s simply a […]

There is little else better than slathering good, fresh butter on good, fresh bread. It is its essentiality, its long, […]

The cool month of October, and K-W Oktoberfest, bring the annual feting of our German heritage in Waterloo Region, but […]

There are a couple of good bakers – and locally based businesses – making a decent bagel in Waterloo Region. […]

Guadalupe Sanchez Diaz beams when she talks about the dishes and cooking at her restaurant, Latinoamerica Unida, in Cambridge. That […]

[Previously posted] Inside, it looks a bit like something you might see on a Bourdain episode as the cook-turned-culinary-celebrity traipses […]

This Saturday, after you’ve visited the Kitchener Market for its 150th birthday, start a late breakfast with a sip of […]

Because it doesn’t use a bacterial culture or rennet (an enzyme), ricotta cheese is technically a “dairy product,” but it’s […]

If you visit Chef on Call with any regularity, you’ll notice that they feature something called the “Donator” burger. Each […]

Zane Caplansky, a Toronto-based chef and celebrity cook you may have seen on various Food Network cooking shows, including alongside […]

Apostrophes: I’ve been collecting them from local markets and produce sections. Of course, I kid. A versatile and popular piece […]

I’ve eaten at Bloom Restaurant at Conestoga College at its various locations over the years, from its early home on […]

Because it’s apple season, it’s also cider season. As the apple harvest rolls in, the ciders get made. They are […]

In September of 1899, the Carnation company launched “Carnation Sterlized Cream.” The company eventually changed the name to “Carnation Evaporated […]

Restaurants are first among equals when it comes to building a neighbourhood: if you want to re-vitalize a city block, […]

Saturday, September 28, is the 2019 Wellesley Apple Butter and Cheese Festival, an annual event that started in 1976, which […]

Pasta comes umpteen ways to your table: alfredo, arrabbiatta, con vongole and more. But a favourite of mine is carbonara. […]

I want to explore new worlds! During the last 15 years, I’ve been very happy to support, promote and advocate […]

With all due respect to New York, I prefer Montreal bagels. I like their slightly sweet, less fluffy and more […]

Laminated doughs, viennoserie and artisan sugar confectionery: theory meets practice — with an eye to raising the standards of the […]

It’s a blend of hot and cold, of smooth and sharp, of rich, creamy butteriness and acidity that is one […]

As a region grows in population, it can also potentially grow in what I call culinary “sophistication.” I don’t mean […]

In just over a year, Conestoga College hospitality management graduate Megan Dron and her Red Eye Cafe and Donuts has […]

Stroll the streets and discover the rich and varied food scene of downtown Kitchener! Those of you reading and continuing […]

It’s early in the afternoon on a very bright, clear day on Metcalfe Street in the heart of Elora. The […]

On a Tuesday afternoon at two o’clock, the dining room at Kitchener’s Lancaster Smokehouse is oddly quiet. Usually, the place […]

Keep checking Instagram to learn where and when Sugar Run, Kitchener’s new “speakeasy,” opens — and to get the password […]

I hear periodically that we should “cook our own food from scratch.” That’s true, but it’s not that simple. I […]

[This article appeared previously in The Kitchener Post] There are two types of people in the world: those who like […]

Please check in here for news and information about walking tours in Waterloo Region and Perth County. A downtown Kitchener […]

Stratford-born Kris Schlotzhauer opened AO Pasta on Erie Street in downtown Stratford in June, 2018, with the intent of re-vectoring […]

Join me at the Stratford Writers’ Festival and “Appetite For Words” on October 26.

I will be at the authors’ table at Taste Real Wellington County on Sunday, June 23.

A few minutes after five o’clock Monday evening, the line of people out the door of B @ THEMUSEUM in […]