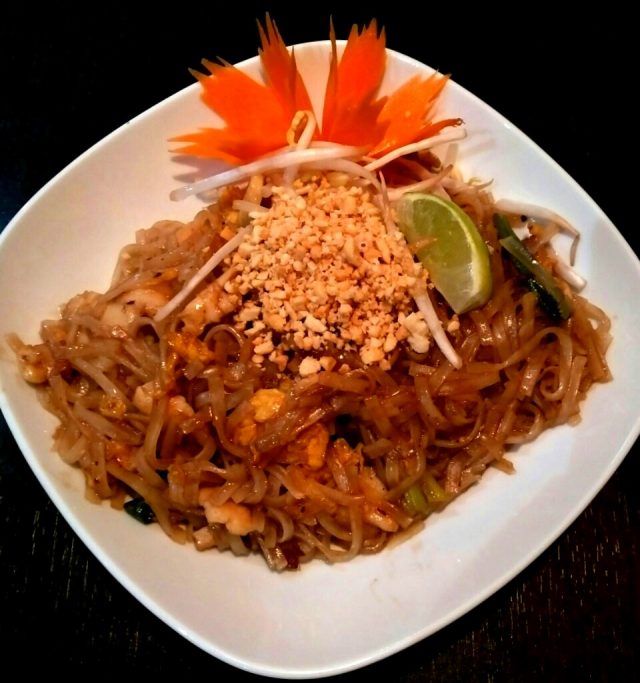 We have been closely monitoring the COVID-19 (coronavirus) situation and the well-being of our valued customers and employees is of the deepest concern to us. We want you to know that your safety will remain our top priority as this situation continues to evolve.

Please call us at 519-748-7676 to place your order ahead of time. Orders will usually take 20-40 mins depending on how large the order is or volume of orders.

[Previously published] I get to talk to many chefs, and whenever I ask what they like to eat in their time off—what flavours call out to them when they go out for a meal—they invariably describe some sort of dish from the Far East: Chinese, Vietnamese, Japanese, and quite often Thai. The most famous Thai choice? Pad Thai. Google it, and you’ll get about six million results.

York University nutritional anthropologist Penny van Esterik has an interesting perspective on pad Thai and other foods that are more than mere dishes: they encapsulate a great portion of ethnic identity, she says.

Her book Materializing Thailand notes that in 1976 there were only nine Thai restaurants outside of the country but that number grew to nearly 20,000 by 2008. Imagine what the pad Thai scene was like here in Waterloo Region 10-15 years ago?

Where are we now? Well, fairly well blessed with several restaurants—and each culturally hybridized—serving kway teow pad Thai, its full and proper name, in a few variations.

Pad Thai, as van Esterik says, is a national—and somewhat bureaucratic—dish if there ever was one. Back in the late 1930s, Siam became Thailand and there was an era of great modernization and nationalization from government sources, including of things dietary. Kway teow pad Thai was virtually decreed a national dish.

What is kway teow pad Thai? Well, it is not terribly spicy, as some people imagine. It’s a balance of starch, protein and veg: a choice of shrimp, pork or chicken accompanied by a sugar of some sort (traditionally palm sugar), fish sauce, garlic, often tofu, and peanuts. And of course rice noodles.

The primarily flavour that I look for, however, is tamarind, the fibrous pulp that envelopes the seeds of a bean tree that is native to Africa and Madagascar. Tamarind has a nice acidity and a deep brown appearance—you will likely know it best as a central flavour in the remarkably vibrant Worcestershire sauce.

The best pad Thai—the variations in the dish and the multitude of individual palates and preferences notwithstanding—has a good balance of these flavours and textures and of course properly executed cooking.

One of my favourite kway teow pad Thai versions is that made by the family-owned Bangkok Cuisine way down on Weber Street east, outside of the city core.

The kitchen at Bangkok Cuisine maintains that it uses a tamarind sauce which I think is supported in the flavour. Ideally, according to the legend of pad Thai, this sauce is tamarind juice, palm sugar, fish sauce, water and salt: cooked down, it becomes a think syrup. They also add slightly beaten eggs to the dish which is the classic preparation. You will also find spring onions and a lemon wedge are part of the garnish.

I can’t say for sure that when you detect a tomato nature in your pad Thai that it is from the addition of ketchup; however, if you look at the condiment historically and linguistically: ketchup may come from the Chinese “ke tsiap”—a pickled fish brine—so that is well in keeping with Asian flavours.

Ultimately, then, the attraction for those chefs on their days off, and for we mortal diners, is the terrific balance of flavours—salty, sour, sweet, and spicy—and the texture contrasts of soft noodles, nicely chewable proteins, and the crunchy mung bean sprouts and peanuts that make pad Thai not only a prescribed national dish but one that is delicious medicine indeed.