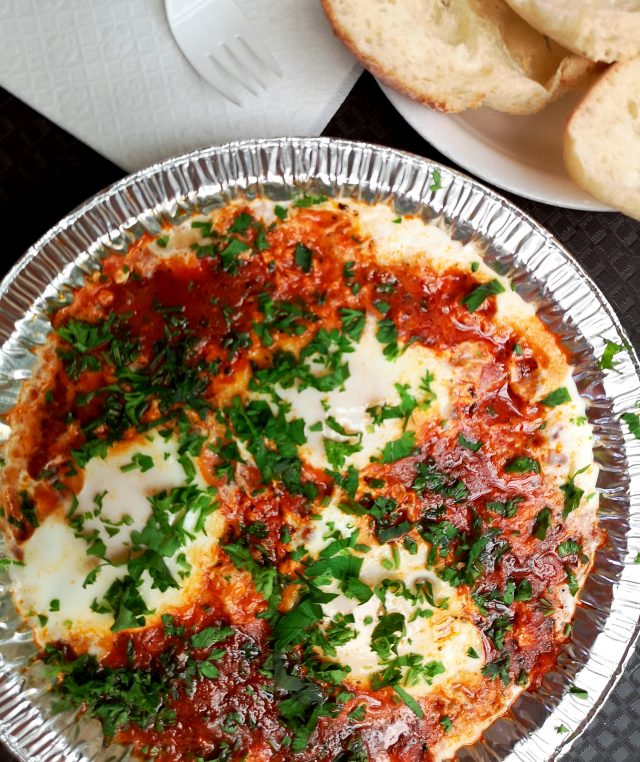 Shakshouka is a favourite dish of mine: eggs in a spiced tomato stew, essentially. Delicious!

After having been closed, along with the other food vendors at the Kitchener Market, Rouaida Almadrmani, is back in business, on Saturdays, serving a range of Syrian dishes.

Support her as you are able!

[Previously published] Family recipes and meals play an important role at restaurants operated by people from other countries now living here. The shakshouka I enjoyed at Naranj Blossom Mediterranean Restaurant, upstairs at Kitchener Market, is but one example.

Rouaida Almadrmani, along with partner Bilal Alfar, own Naranj Blossom (not to be confused with Naranj Middle Eastern Cuisine recently closed near The Boardwalk). Almadrmani does the cooking, and her shakshouka is a family recipe from her Damascus, Syria, birthplace.

They’ve owned the food stand for just over a year-and-a-half, serving shawarma, lentil pasta stew with tamarind, fattet hummus, borek, all-day breakfast burritos with home-made sausage and ricotta cheese atayef. Several dishes are vegetarian and vegan; all are under $10.

While Almadrmani previously owned a restaurant in Mississauga, the deeper roots of her cooking reside in a long-told tale of family meals.

“I came from a big, big family. The number is now over 100,” Almadrmani says. “I always helped my mom in the kitchen because I love cooking. I grew up with this food.”

The Syrian dishes are family favourites and include her grandmother’s recipes.
“When my brothers were in the army, shakshouka was easy to make. It’s tomatoes and onions. They are everywhere. And eggs for protein. It was cheap and quick for them to make,” she says.

Shakshouka is a simple dish with a version popular in Israel and Tunisia, and indeed, in many places in the Middle East. At the food stand, Almadrmani combines and cooks crushed and diced tomatoes, olive oil, onion, garlic, crushed hot banana peppers, which give body to the mix. She adds lots of herbs like basil and oregano.

She shared a few techniques but not all of the ingredients. “I cook the onions well but not caramelized and coloured. And the tomato has to be just the right thickness to hold the eggs.”

Shakshouka is eaten any time of the day, according to Almadrmani. For simplicity at the stand, she inventively cooks and serves it in an aluminum pie plate. She makes small divots in the tomato mixture as it cooks before cracking the eggs and nestling them gently into a space for each.

The pan is covered to finish it and then garnished with parsley; it’s served with some baguette slices, rather than the expected pita, and, though without Parmigiano Reggiano, it reminds me of the Italian dish, “Uova in Purgatorio.”

It’s all about family favourites at Naranj Blossom, both at home and at the food stand, according to Almadrmani.

“I feel shakshouka is a warm, cozy dish. My younger son eats this almost every day,” she says with a laugh. “He loves it. That’s okay with me.”

[Incidentally, Almadrmani is also an artist; some of her pieces are displayed at the food stand. A few years ago, she was a contributor to the “World Refugee Art Exhibition” at THEMUSEUM.]