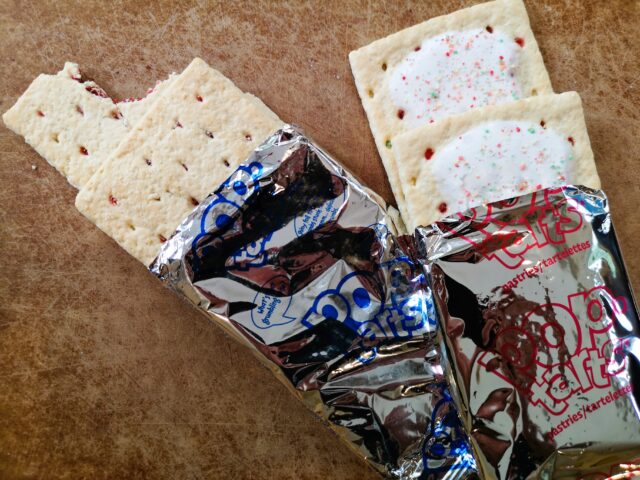 I’ve long been a Pop-Tarts fan. Since I was a kid.

In many ways, the kooky toaster pastries capture North American — and specifically American — pop culture. The name of the things draw that fact in.

In the 1960s, the snack food (you certainly can’t call it breakfast) was a battle-ground between two breakfast cereal-giants, but Post went and called their pastries the lame-ass “Country Squares” and eventually lost out to Kellogg’s Pop-Tarts, which were originally called “Fruit Scones” (just as dumb).

The foil wrap of the Pop-Tart, made of Mylar(TM) in the beginning, also captures another aspect of the pop culture of the era: the space race and a whole range of foods that came about in the 60s and 70s, including “Space Food Sticks” and Tang. It was all about “moon fever.”

In the United States, today there are nearly two dozen flavours including unfrosted. I like that version particularly. Just pop them in the toaster and munch. They’re fun and not so sweet as frosted. Some people, I’ve heard, even butter them.

But alas, Kellogg Canada no longer carries unfrosted Pop-Tarts. They did at one time, but the company says they were discontinued due to lack of customer interest in the market. There are no plans currently to re-introduce unfrosted Pop-Tarts, they say. More’s the pity, as far as I’m concerned.

P.S.: If you’re travelling in the U.S., please bring me back some.

In June 2021, Jerry Seinfeld announced he would produce and star in a movie about the

The first episode of the History Channel series, The Food That Built America, includes the battle between the Kellogg and Post companies, and the invention of the Pop-Tart.[22]

The TV Show Family Guy featured a song about Pop-Tarts, and how good they taste with butter.[23]

Thomas Nangle filed a lawsuit in 1992, suing Kellogg for damages after his Pop-Tart became stuck in his toaster and caught fire. The case gained wider notoriety when humorist Dave Barry wrote a column about starting a fire in his own toaster with Pop-Tarts.[31][32] Texas A&M University Corpus Christi professor Patrick Michaud performed a 1994 experiment showing that when left in the toaster too long, strawberry Pop-Tarts could produce flames to about 1.5 ft (46 cm) high.[33] The discovery triggered a flurry of lawsuits. Since then, Pop-Tarts carry the warning: “Due to possible risk of fire, never leave your toasting appliance or microwave unattended.”

In October 2021, a woman in New York sued Kellogg’s for $5 million over what she claimed

was misleading advertising about Strawberry Pop Tarts. Her suit alleges that “The strawberry representations are misleading because the Product has less strawberries than consumers expect based on the labeling.”[34] This lawsuit was dismissed in March 2022, with US District Judge Marvin Aspin writing “The word ‘Strawberry,’ combined with a picture of half of a strawberry and a Pop-Tart oozing red filling, does not guarantee that there will be a certain amount of strawberries in the product’s filling,” [35]