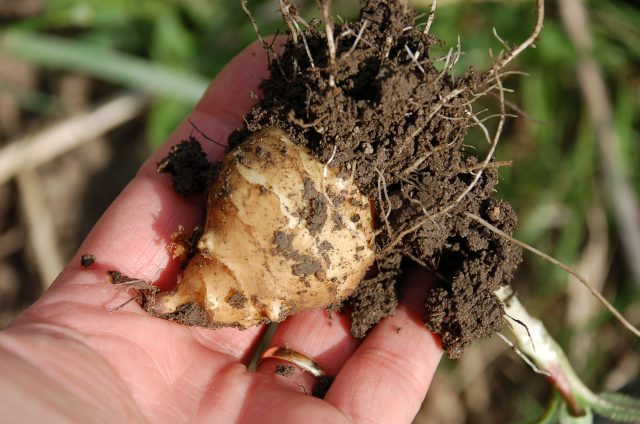 I once received a phone call from a reader in Gadshill, just north of Stratford, who was curious about a sunflower-like plant that was growing aggressively in her backyard. I went to investigate.

Turns out it was a Jerusalem artichoke, and it grows wild in many places in Waterloo Region. It has a complex and enduring history, and for nearly 400 years both parts of the name have been the subject of conjecture.

As early as 1585, Sir Walter Raleigh noticed the vegetable being cultivated by indigenous peoples along the eastern seaboard from Georgia to Nova Scotia. Raleigh and the pilgrims came to call the plant a “sun root,” and it was a mainstay of their diet in the “new Jerusalem” that was America.

When it arrived in Italy in the 17th century, it was thought to look like a sunflower: the Italians called it, poetically, girasole, or “sun turner” (a heliotropic plant that follows the sun). Given their food sensibility, the Italians then added articiocco because they thought it tasted like artichoke. Hence, girasole articiocco. Girasole eventually morphed into “Jerusalem,” it is thought, as the seven-foot-tall perennial tuber made its way around Europe.

The plant has a decided Canadian connection which gets us a bit closer to Gadshill. Samuel de Champlain, the father of New France who explored the Saint Lawrence, encountered it in the early 1600s. Even while otherwise occupied establishing the first European settlement in what is today Quebec City, Champlain was impressed enough to send Jerusalem artichokes back to France: he referred to them as the “Canada Potato.”

Interestingly, Canada potatoes appeared in France at roughly the same time as captured slaves from Brazil: as they were nastily paraded through the streets of Paris, these striking native peoples—the Topinambas—and Jerusalem artichokes, which at the time were being sold from street vendors’ carts, became conflated” the French word for Jerusalem artichoke is “topinambour,” and you can still find dozens of recipes for les topinambours; Elizabeth David’s French Provincial Cooking (1960), for instance, lists three.

Whatever it was called, the Jerusalem artichoke has suffered the slings and arrows of taste-bud disapproval with a virulence that only a kid could muster over a plate of mushy Brussels sprouts. It was scorned because it was thought to cause leprosy, a result of its scaly skin and knobby finger-like shape.

Then, in the twentieth-century, it was seen as food for the poor, a stigma generated out of the Second World War: the French especially came to despise it because it was virtually the only vegetable obtainable. Yet, by dint of its heartiness and quick growth, as my Gadshill caller experienced in her backyard, it saved millions from starvation.

But the Canada potato is a good ingredient for diabetics, and flour ground from the tuber can be used by people who suffer from allergies to wheat and other grains.

I’ve found them Central Fresh Market in downtown Kitchener and at a number of other venues, but how to cook the Canada potato? It’s much like a potato or celeriac, in fact. With their nutty flavour, they work well roasted or made into chips.

You might also grate them raw and add a bit of grain flour of some sort to make a pancake too. That’s part of a breakfast at least four hundred years in the making, I would add.