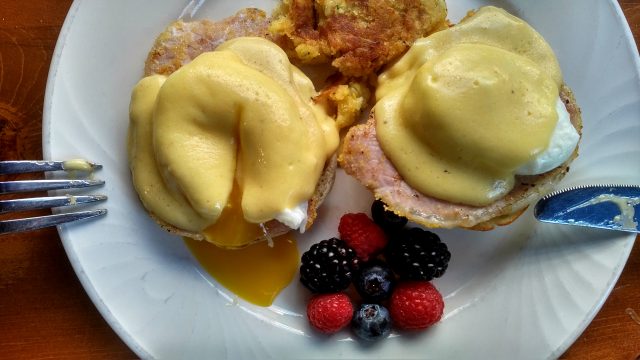 The popular breakfast Eggs Benedict is a unique, sort of self-reflexive dish: it’s essentially eggs with an egg sauce. And it’s delicious and satisfying in its creamy richness with a hint of lemon.

Howie and his wife and business partner Liz Howie own and operate the breakfast and lunch restaurant across from the Walper Hotel on Queen Street – and have been doing so now for about four years. The pair previously owned and operated The Rum Runner pub, formerly downstairs at the Walper, for several years.

Howie attended George Brown College for his formal culinary education and would describe himself as trained in classic French cookery. Notably, he worked with the late Janet Lynn Leslie of Janet Lynn’s Bistro when it opened in the Market Village, now, of course, part of Belmont Village.

Among other breakfast and lunch dishes, Darlise serves six Bennies ($10-$13), including all-day breakfast. Howie handles the distinguishing feature of Eggs Benedict with aplomb: Hollandaise, a French “Mother Sauce,” holds together not because of a binder such as flour, but because it is an egg-emulsified butter sauce.

Other Hollandaise makers will use a double-boiler fashioned of a large bowl sitting on a smaller pot of gently boiling water, rather than on open flame. It’s actually remarkable to watch Howie make the sauce.

As for using clarified butter, whole butter is watery and thins the egg yolk and therefore takes more whisking. Clarifying the butter separates the milk solids and leaves you with butterfat, which, along with heat, thicken the Hollandaise.

Fluid mechanics aside, Eggs Benedict is a nice soft, runny poached egg cooked for about two-and-a-half minutes, so it oozes nicely and blends with the pea meal bacon, English muffin and the Hollandaise.

Add to that Howie’s potato pancake. He cooks the potatoes with skins on, cools and peels them. He then adds caramelized onions, salt and pepper, garlic, some sugar and parsley. “That is bound with chickpea flour and eggs, so they’re gluten-free,” he says. “It’s my own recipe.”

In a busy, busy restaurant, dishes that come together quickly are important; for veteran cook Howie that includes eggs with an egg sauce.