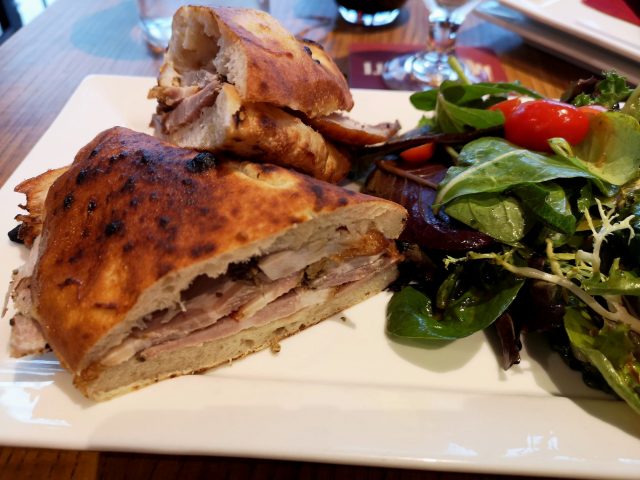 Located in the west end of the central core of the city, La Cucina is open for take-out, delivery and patio dining from Tuesday to Sunday.

Reservations are required, according to La Cucina.

Previously published, below, is a story about one of my favourite sandwiches at La Cucina and where it came from — that is, La Cucina chef Emiliano Fabbrizi and his hometown of Bagnaia, north of Rome.

A bite of the delicious porchetta sandwich ($14 with a side salad) at La Cucina in downtown Kitchener’s west end is a bite of Bagnaia, Italy, a small town about 100 kilometers north of Rome.

The village in central Italy is the hometown of La Cucina chef Emiliano Fabbrizi, and is ground zero as the inspiration for the sandwich, one that has many versions and regional differences.

Depending on where you are, the slow-roasted and seasoned porchetta is likely made with variations and alterations of technique and ingredients, according to Fabbrizi.

“It’s very traditional. With fennel, this is how it is made in Bagnaia. In Rome, they make it with rosemary,” Fabbrizi says.

For what it’s worth, and as is done in a number of European countries, the department responsible for food and agriculture in the Italian government has declared porchetta a “culturally relevant” food.

To prepare the dish, Fabbrizi cuts up pieces of pork shoulder and rolls it in pork belly, after the meat gets a good, but simple, dosing of salt, pepper, garlic and fennel. “I let it sit for a day and then wrap it up,” Fabbrizi says. “It then cooks for four hours.”

The result is magical. It’s a confluence of flavours but as well textures: soft and malleable (from the fat marbling) contrasts with crispy bits and an almost candy-like chew (from the slow cooking) that adds an additional layer of taste – and therefore pleasure.

Fabbrizi uses the pizza dough they make at the restaurant, with its slight touch of sweetness, for the bread. It’s a warm sandwich that he pops in the pizza oven to temp up. Like I say: it’s delicious.

A couple of years now at home in the downtown, La Cucina (with a sister restaurant in Guelph), has a dozen antipasti, arancini, beef, pork and veal meatballs, a vegetarian board and nearly 20 pizzas on the menu. There are 10 pastas, panini and dishes such as scallopini and osso buco with risotto.

The burrata is delicious and comes in small and large. There are daily specials, including a $14.50 lunch special every day.

There are about two dozen red wines, with about 16 by the glass, as well as a few special selections – such as a $240 bottle of Tuscan Tignanello (not available by the glass) — with the (obvious) focus on Italian wines.

The porchetta meat, in a sandwich or not, is a street food in many central Italian regions such as Lazio. Scattered throughout, you might come across “fraschette,” small kiosks which, as long ago as the Medieval period, were places to refresh oneself with a drink and a bite to eat during your travels.

“Today, there are food trucks and people stop and buy a sandwich,” Fabbrizi says.

So imagine a frascetta experience when you drop by La Cucina and grab a porchetta sandwich with its crisp and gently charred bread. It’s simple – there are no sauces because the meat is so tender and moist – and it does refresh.

“I like the tradition of the sandwich,” Fabbrizi says. “It’s something I remember from home.”