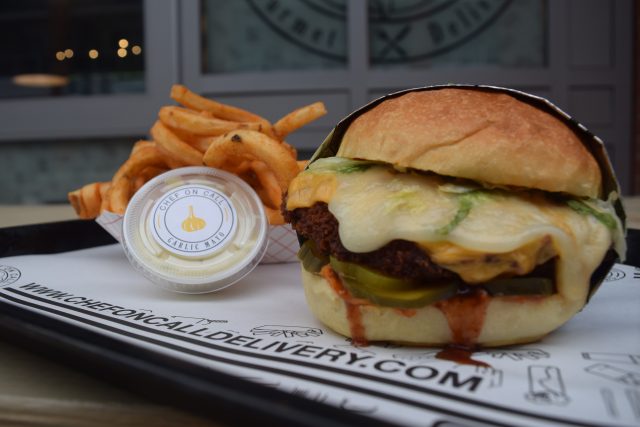 Chef on Call has supported local not-for-profits through their monthly “Donator burger,” as described in the previously published article, below.

That spirit continued in May when they started a now completed campaign to support frontline healthcare workers.

[Published earlier]
If you visit Chef on Call with any regularity, you’ll notice that they feature something called the “Donator” burger. Each month, they collaborate with a different local non-profit organization or charity and $2 from the sale of every “Donator” burger goes to that organization.

Located at 130 Columbia Street West in Waterloo, Chef on Call started the initiative at their original location in Quebec, and it has continued here in Waterloo Region.

“We started it in Montreal in 2014, and we have since raised over $40,000 for local charities,” says Gabe Malbogat of Chef on Call. “Over the past five years, we’ve enjoyed every single moment and are thankful for the people and projects we’ve helped along the way.”

For October, Chef on Call teamed up with the Waterloo Regional Down Syndrome Society (WRDSS). “We had a group of kids come in a few weeks ago, and we hosted a mini cooking lesson and came up with the Donator burger ingredients,” he says. “On Tuesday, (October 1) some of the kids are coming back, and we are having a launch party from five to eight p.m.”

For their part, the WRDSS says that creating the Donator burger was important to the kids.

“We’re thrilled to be the charitable benefactor of Chef on Call’s Donator Burger for the month of October,” says Tara Hart, WRDSS Board Co-Chair. “I cannot thank this outstanding local business enough for not only helping to raise awareness and funds for our charity but for including a group of our teens and adults with Down syndrome in the process of creating this menu item.”

The Donator burger for October, as conceptualized by guest chefs is a crispy hand-breaded chicken burger topped with iceberg lettuce, sliced pickles and a mix of melted Monterey Jack and Cheddar cheese. All that is brought together by a barbecue-infused spicy mayo sauce.

Malbogat explains that he recalls the after-school and community outreach programs that were free in the public school system when he was young. “Unfortunately, this is not the case any longer, given the cutbacks in education. Those programs made my childhood memorable and happy. We want to insure that these kids are given the same opportunities that I had.”

He adds that the Donator initiative is important to Chef on Call because of the way the community has supported the restaurant over the past decade.

“We recognize the need to give back,” he says. “As a local business with strong community ties, it’s our responsibility to do this.”

For the kids, the burger creation represents a key connection to have made with the community, according to Hart.

“The kids enjoyed the opportunity to showcase their creativity and abilities, and we encourage the Waterloo Region community to come out and enjoy a Donator Burger in October in support of a great cause.”