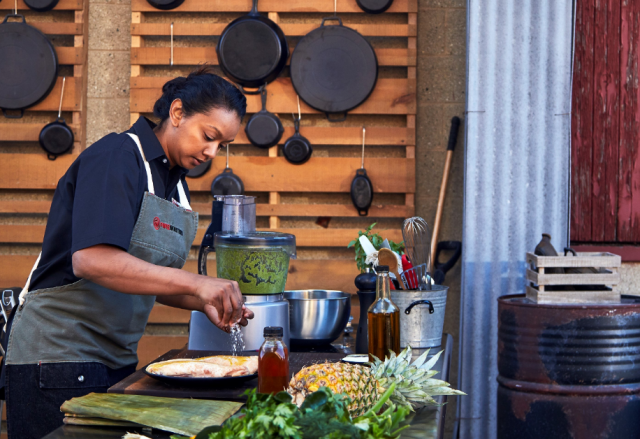 Chef and Conestoga College culinary graduate Navita Singh has put herself into stressful situations in the kitchen not once but twice as a competitor on the popular Food Network television shows Chopped Canada and Fire Masters.

“It’s very hard, especially when it’s your first time. You’re putting yourself out there, but I learned that you have to trust your instincts, no matter what,” says Singh as she reflects on the pressures of a reality TV show.

At 28 years of age, Singh was the youngest Chopped competitor in the season three episode in which she appeared a few years ago – and with three rather tough judges: Canadian cooking icons Roger Mooking, Mark McEwan and Susur Lee. Singh had actually worked for Lee at one point at his former New York City restaurant Shang before she met him again on set. That fact only added to the stress, she says.

Make no mistake: Singh has done several competition-style cooking events – including Uptown 21’s popular “Iron Chef” fundraisers several years ago. And after Chopped, her name came up when the Fire Masters’ production team were in the area looking for contestants: she got the call. There was a strenuous interview process, cooking tests and then the actual cooking competition, with an arduous taping taking place over 15 or 16 hours in the same day last summer in Hamilton.

“All I cared about was not getting sent home the first round, like I did on Chopped,” she says. “At the end, it took two hours and forty-five minutes to determine that Fire Master Hugh Mangum beat me. It was just a point, so that was worth it right there. It was a great experience.”

While she’s currently not heading into any nationally televised competitions, the pace of her life remains quick: Singh currently balances culinary teaching in Woodstock until the end of June with the three late-week shifts she takes behind the stoves as a chef at Waterloo’s Loloan Lobby Bar, likely Waterloo’s hottest restaurant.

Yes, Singh has her plate full — and she seems to like it that way.

Culinary wasn’t on her radar

Born in Guyana, Singh came to Canada when she was seven. “I have a lot of family in South America and visit every couple of years,” she says emphasizing a sense of family and a connection to the culture. “We have strong roots.” A graduate of Preston High School, she admits cooking wasn’t top-of-mind and a culinary career was never a part of her planning. “It wasn’t on the map. My dad [Singh’s mother passed away early] and the family were always good cooks. We had good home-made food, and that was what we were used to.”

In the usual succession of educational phases, Singh enrolled at Wilfrid Laurier University and graduated in 2005 with a minor in psychology. “I wanted to become a psychiatrist but realized it would take 10 years of school and cost too much money,” she says. At that point, she saw an ad for culinary school at Conestoga College: “I just decided to apply. I got accepted, and I didn’t even know how to hold a knife. I hated first year and almost dropped out because I wanted to cook and not do calculus and theory. But I slowly realized that it’s part of the foundation of what you need to know. Philippe [Conestoga instructor Philippe Saraiva] conditioned that into us,” she says of the three-year program she went through. “He really pushed me.” For cooks learning, Singh emphasizes mastering technique and paying attention to detail. “You’ve read the books, but you have to be able to execute at the restaurant.”

Guided by Saraiva, she undertook Skills Canada competition and as a student did her first co-op position at the former Verses fine dining restaurant on Victoria Street in Kitchener. She says she learned a lot under the supervision of Verses chef and co-owner Brett Shantz, a cook she holds in the highest regard. “Anyone who has worked with Brett knows what the culinary world is all about. He’s amazing.” She worked at the restaurant for a few more years as garde manger, pastry chef and finally sous chef.

Singh has been nominated for a James Beard Award and following a year off did a stage at Bar Boulud in New York City and worked at Lee’s Shang, which closed in 2011. “That was an amazing experience. I made a lot of staff meals,” she says with a laugh. “I butchered a lot of fish and lamb, peeled a lot of potatoes and turned a lot of vegetables, but when you’re exposed to amazing people like that, it helps to form you. I learned what type of aura I want to be around from Susur and Brett really taught me the foundations and techniques. I then got a very good understanding of flavour and balance from Paul Boehmer [of Bhima’s Warung and Loloan].” She spent six months at Bhima’s before travelling and a doing a brief stint at Oliver & Bonacini in Waterloo. “By then, Bhima’s was hiring and I stayed there for five years. I learned a lot about Indonesian, Thai, Malaysian and Singaporean cuisine, including during a trip to Bali where Paul owned a restaurant,” she says.

In 2015, and after about a decade in the business, Singh says it was time to take a break and reflect on what she wanted to do. She spent some time as sous chef at Google, both in Kitchener and Toronto. “It gave you a nine-to-five work day,” she adds. “You can have a life. You need that break.” Today, Singh also operates a private chef business on top of her teaching and cooking. She doesn’t stay comfortable long and equates change with evolution and development – and that includes getting married this past January. Her role teaching culinary skills in Woodstock has set the stage for her to get a teaching degree and continue with culinary instruction. In the past, she has also volunteered with the Waterloo Region school board’s “U-Turn” program designed to help at-risk youth; she taught kids basics and fundamentals in the kitchen. “I feel like you have to give back,” she says.

Her longer-term goals include starting a family, but she’s ultimately headed toward her own food operation, she says, a “soul food-type café,” something she wants to have as an expression of what food means to her from her Guyanese background. “This is the idea that I have for five years from now. I want to take the flavours that I know and that I really love and let others experience them.”

The sum of her experience, from a start at Conestoga with no culinary skills to reality television cooking competitions and Bhima’s Warung and Loloan, two of Waterloo Region’s premier restaurants, tells Singh who she is and what she loves to do.

“It’s helped me embrace what I do well, and I believe that I can put myself out there because of that.”

Other career you could have pursued?
Singh: Psychology, counsellor.

Beverage that once just about killed you?
Singh: A very strong Long Island ice tea that Leanne at Bhima’s makes.

Chef you’d most like to meet?
Singh: Gaggan Annand.

Best footwear (for the kitchen or otherwise)?
Singh: Birks. Always replace the soles.

Favourite “international” food in Waterloo Region?
Singh: I work at both, so in that case I’d say nothing better than home cooked food from a family member.

What scares you in a kitchen?
Singh: Time. Always trying to beat it.

Greatest failed recipe?
Singh: Trying to do a vegetarian version of pasta carbonara. It’ll never taste the same without bacon or eggs.

Something that gives you great pleasure?
Singh: Seeing the smile on people’s faces when they are eating. Fuels the soul.

A moment in your life you’d like to have back?
Singh: My trip to Bali. I think I could stay there forever.

Who would you like to cook for?
Singh: Anyone who enjoys food as much as chefs do!

Best thing about being a chef?
Singh: We have the power to touch someone’s heart with the food that we cook and serve. That’s just a beautiful thing.

Dumbest purchase you’ve ever made?
Singh: Mistakenly ordered Callebaut Chocolate but read the price wrong and ordered way too much. Not that a lot of chocolate is a bad thing!

TV chefs who annoy you?
Singh: Gordon Ramsay — or any food show that presents the wrong view of the culinary world.

Would you describe yourself as sweet or savoury?
Singh: A bit of both actually. You need both for balance.