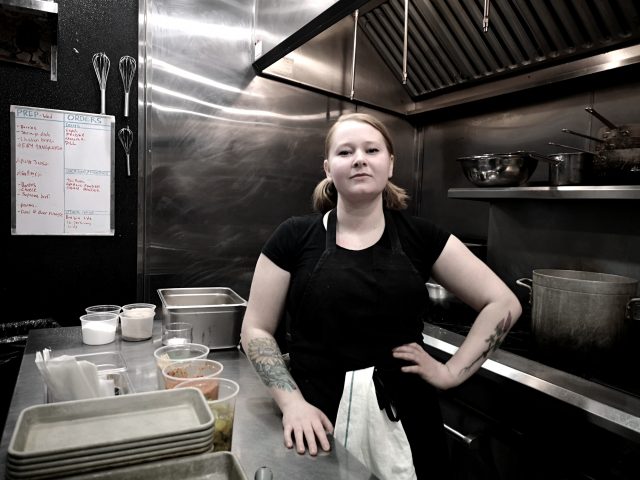 Of her brief time at Arabella Park Beer Bar in Kitchener’s busy neighbourhood enclave, Belmont Village, Emily Schlieper says loves the work she does — and the beverages.

“It will only be a year here in September, but I just love it,” Schlieper says. “There’s always sours on tap and interesting beers. There’s so many complex flavours.”

Though relatively young, Schlieper has brought experience from some of the top restaurants she’s trained and cooked at and applied it to her current work in the innovative restaurant which is a haven for beer lovers, and folks who love cool and unique food to share from a frequently changing menu.

Born and raised in Acton, Schlieper divided her high school years between Fergus and Acton classrooms. At home, her father was, she says, a good cook who whipped up some pretty cool things at the stove. When she was 16 or so, she started working in the kitchen at a golf course and eventually in the kitchen at a bar.

“It was pretty basic, but it taught you how to hustle,” Schlieper says. “At some point, my dad said I had to start paying rent or go to school somewhere. I decided that if I was going to pay rent, I was going to move out.”

Schlieper enrolled at Conestoga College for culinary arts in 2010. While she was attending Conestoga, she was working at Nick and Nat’s Uptown 21 Food and Drink. “I’d been cooking and liked it, but Uptown was my first real kitchen job where we were doing cool stuff. It was then that I knew I loved the rush of working the line, and I felt that I was good at it,” Schlieper says.


She took that burgeoning confidence as a young cook and applied it at a number of other area restaurants as she honed her skills: she spent a good amount of time working with Public Kitchen & Bar owners Ryan Murphy and Carly Blasutti at the original Lancaster Street venue.

“After a few years, I took a break from finer dining and worked a couple of part time jobs to make money at the same time I could take some vacation time,” she says.

Schlieper also worked at JLB Bistro in Belmont Village, J&P Grocery and The Healthy Butcher: she looks at time spent in a variety of kitchens and working conditions as good for career development. “It was great. It’s easy to get comfortable and not learn anything new. I think you need to realize that if you’re not happy in a place, it’s okay to leave.”

It’s sage advice. But it also points toward some to the culinary training she received at the College. “Wherever you go, work hard and do the things the chef is asking you to do. Be clean, and don’t be afraid to work hard and show you want to learn,” Schlieper says.

At Arabella, Schlieper is sous chef and oversees her share of managing the kitchen and delegating tasks along with head chef Andrew Thorpe. “I do a ton of the prep, and Andrew and I team up when it comes to menu development. That’s nice. And we all kind of take turns being the dishwasher.”

She calls it a “very different” environment than she’s worked at previously. There are those dishes that she says are “crushable” and that go with beer, but there are more composed dishes such as black scallops with yuzu gel and smoked duck with a ginger-carrot purée.

Looking ahead, though she’s not yet 30 years old, Schlieper refers to it as “the dream:” “I’d move to Nova Scotia and open a six-room bed-and-breakfast, somewhere on the Cabot Trail. It’s beautiful, and I’d like to do cool food, like a dinner service for 20, but not only rely only on food sales. I’d really like to end up out there,” she says.

Until then, she’s quite happy within the cool and unique environs that is Arabella Park.

“It’s fast-paced here, and I have a lot of independence. It’s a lot of fun.”

Other career you could have pursued?
Schlieper: Dog walker. I love dogs.

Chef you’d most like to meet?
Schlieper: Julia Child. She was a real bad ass.

Best footwear (for the kitchen or otherwise)?
Schlieper: Doc Martens for both.

What scares you in a kitchen?
Schlieper: The amount of aïoli I taste on a daily basis.

Greatest failed recipe?
Schlieper: I have this idea for a “Savoury Egg Salad Sandwich Cake.” I haven’t made it yet, but it will be gross.

Something that gives you great pleasure?
Schlieper: Ground beef burritos.

A favourite teacher you’ve had?
Schlieper: Brendan Gingerich at J&P Grocery in downtown Kitchener. He taught me a lot about food and even more about being a great leader.

Do you ride a bike?
Schlieper: Yupp, I’ve got a basket for it, too. How else am I going to carry my baguettes?

A moment in your life you’d like to have back?
Schlieper: Camping along the Cabot Trail and eating all of the shellfish.

Favourite band?
Schlieper: I really like “The Guess Who.”

Who would you like to cook for?
Schlieper: Anthony Hopkins. He’s a fox.

The thing you wish for Waterloo Region?
Schlieper: More dog-friendly places to drink a beer.

Best thing about being a chef?
Schlieper: Seeing people enjoy the food you make.

Dumbest purchase you’ve ever made?
Schlieper: An iMac desktop for culinary school was pretty dumb.

Would you describe yourself as sweet or savoury?
Schlieper: I’m sweet as … !