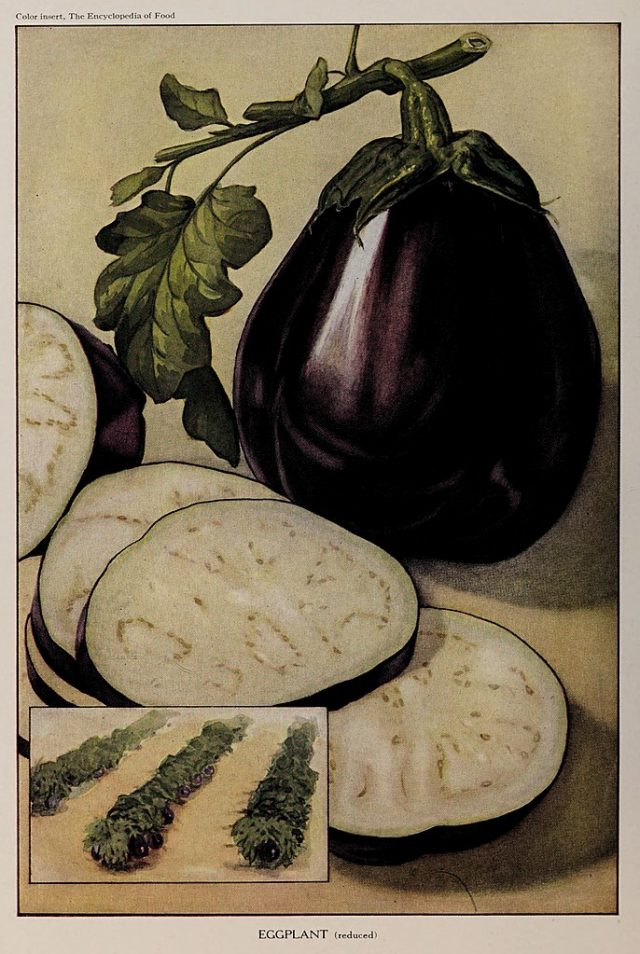 The eggplant is part of what is known as the “nightshade family,” the same family in which you’ll find potatoes, tomatoes, chili peppers and tobacco.

It’s also one of those food items that we call a vegetable but is really a fruit – and even more specifically, eggplant is a berry.

Ranging in length from just a couple of inches to a foot, the eggplant can be a wide range of colours too. There are Japanese and Asian eggplants and Italian and baby eggplants. The most common variety is the larger pear-shaped eggplant that is at peak season between August and September. The skin of older eggplants is tough and generally needs to be removed before used in cooking applications.

One story of the large purple egg-shaped plant and how it might have reached further regions of the world is that an early version of it, likely originating in India or southeast Asia, may have at one time simply floated to another distant land and was eventually brought to North America.

It turns out that the cell structure inside the eggplant’s flesh would have allowed it to float – and it is the same cell structure that makes cooking, and especially frying, eggplant a little bit tricky.

Eggplant has a sponge-like flesh by virtue of miniscule air pockets between the plant’s cells. When the flesh is cooked, the structure collapses and, depending on the variety of eggplant, becomes either creamy or solid and therefore of a firmer texture: that can be a benefit, of course, depending on the dish that is being cooked.

It is used in classic dishes such as baba ganoush, moussaka and melanzane alla Parmigiana. It also pickles quite well and as such can make a significant contribution to a salad or an acidic element on a charcuterie board.

To salt or not to salt?

Given those dishes, chefs will have different objectives when it comes to cooking the vegetable: they will either want a creamier eggplant or a stiffer, firmer eggplant. The other factor when cooking eggplants is that they tend to cook down into a much smaller volume than what you started with at the same time that the air pockets soak up a lot of oil when they are frying. Dégorger, a process of salting a vegetable like eggplant in order to remove excess water, is thought by some cooks to improve pan-frying slices of eggplant and see them cooked more quickly before soaking up too much oil.

Decades ago, before less bitter eggplant varieties were bred, the dégorger process was thought to alleviate the vegetable of some of its bitterness; however, less bitter eggplants are now produced and many cooks don’t see an appreciable difference between a salted eggplant and an unsalted one. Otherwise, another preparation strategy that might be recommended is to partially cook eggplant slices for a short time in a microwave in order help them absorb less oil.

India, China, the Middle East and Greece all love eggplant, but if there is region of the world that sees it as something of a defining vegetable it is southern Italy and Sicily. Catania, sitting just under Mount Etna on the east coast of Sicily, is one of many places that cooks caponata in its varied regional fashion.

The dish is often agrodolce – a bit sweet and sour. Done properly, Catanian caponata isn’t a stew like, say, the popular Provençal dish ratatouille. Chopped eggplant, peppers, tomatoes, onions and celery are each sautéed separately to harness their individual flavours and particular textures by cooking each to their optimum degree. The ingredients are assembled and some sweetness (such as honey) is added along with white wine vinegar, green olives, capers, a few hot pepper flakes, a little tomato sauce and a drizzle of anchovy juice. A garnish of mint becomes a nice addition. The dish can be eaten hot or cold.

A final note: eggplant, a vegetable which hails orginally from hot tropical climates, doesn’t keep well in the cold of a walk-in cooler: the chill damages the internal tissue and leads to brown discolouration and changes in its flavour.