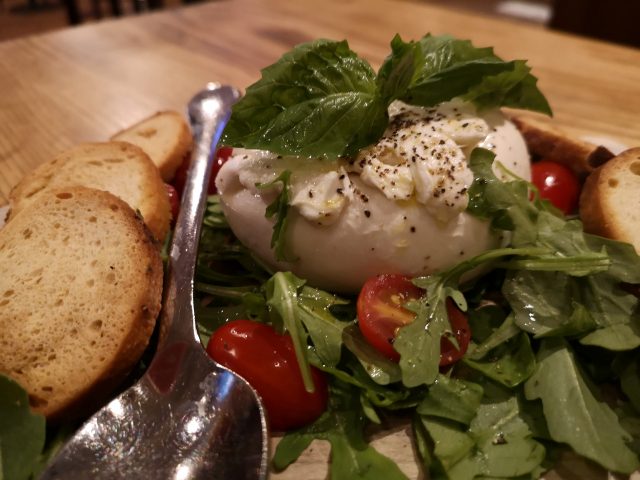 If you are a bona fide cheese lover, you will probably already know about burrata; if you haven’t had it, make sure you find some. It’s delicious.

I recently had the burrata at downtown Kitchener’s La Cucina. It’s a great dish to share as an appetizer and sip a glass of wine.

The word burrata is basically Italian for “buttered” and, the origin story goes, its creation was a way to use up left over bits of cheese in the process of making Mozzarella (or as Tony Soprano would say, “mootzarell”).

The “pasta filata” method (which means stretched, spun or pulled “paste”) takes fresh curd and dips it into hot whey — something Little Miss Muffet never did while sitting on her tuffet. The cheese is stretched and moulded into a ball shape.

Unlike many classic and ancient cheeses, burrata is not that old; it probably first appeared in southern Italy in the early 1900s; it is often made with buffalo milk. As well as Mozzarella, Caciocavallo and Provolone are also made by this method.

To make burrata, the formaggiaio forms a hollow little receptacle out of the stretched cheese and fills it with bits of Mozzarella and cream (the key is that cream!). The top is twisted closed, and the cheese is dipped in brine.

From then on, it’s a magical culinary process that sees the cream thicken inside. When you cut the burrata open, the thickened creamy mixture oozes out sumptuously.

It’s probably difficult to find, but the end result is best when eaten within 24 hours — and purists will say that it is past its prime after two days.

Specialty stores such as Vincenzo’s in Waterloo also carry burrata.