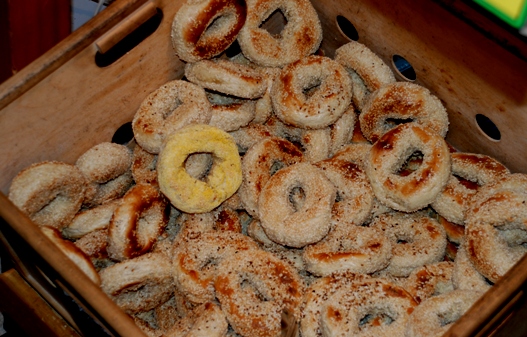 [Previously posted] With all due respect to New York, I prefer Montreal bagels.

I like their slightly sweet, less fluffy and more chewy nature. Granted, the more bread-like, fuller New York bagels are better for sandwiches, but for the best bagel-and-cream-cheese-experience, it has to be the Montreal.

The word bagel translates loosely from the Yiddish and German to mean something like “ring,” and this of course makes baking and etymological sense, given the bagel’s shape.

Bagels made their way from eastern Europe really only in the early 20th century with the people (and their wonderful culinary traditions and knowledge) who sailed into Ellis Island and helped with shaping the food culture of North America. That it likely appeared at the gateway of world immigration at New York (though Ellis Island is actually mostly in New Jersey) neatly explains how one name came into play.

However, there is evidence that the original Ellis Island-immigration bagel was the sweeter chewy version we know and love as a Montreal bagel. At some point in its history, it seems to have evolved into a fluffier, more bread-like ring that is the New York bagel.

The Ur-Montreal bagel really got established in places like St-Viateur Bagel Shop, which was founded in 1957, and Fairmount Bagel. I’ve just been visiting family in Montreal and had a good dose of the former: they’re just delicious. These two shops, both decades old now, are credited with being the anchors of true Montreal bagel-ness.

It is of course not merely the shapes, diameters and weights that are at play here. There are important culinary differences between the New York and Montreal bagel – the latter of which we have quite delicious examples here in Kitchener. (Rise and Shine Bagel Co., a very popular New York bagel joint in Waterloo has shuttered.)

A Montreal bagel is just slightly sweet. There is usually not much (or not any salt) in the hand-made dough, but there is the all-important honey; and there is also often honey in the water in which the bagels are gently poached. After their short, sweet honey-water bath, the Montreal bagel must then be baked in a wood-fired oven: that is a critical difference.

The external crispness and just slight charring from the lick of flames gives an added flavour depth – think of a subtle sweetness with nutty sesame-seed deliciousness – to the soft but slightly yielding chew of the bagel interior. There’s not much better.

With several Kitchener locations, City Café Bakery pumps out a lot of Montreal-style bagels along with their breads and pizzas. The coating of cornmeal adds to the deliciousness.

The important wood ovens are front and centre at the City Café locations – Lancaster and Bridgeport, Ottawa and Charles and Victoria and West – and combined, I imagine they must be churning out thousands and thousands of bagels each week.

City Café owner, John Bergen, used to be in the ceramics business, so it makes sense that, when he started his first café in the late-1990s, he knew a bit about heat, fire and baking.

Alternatively, you can also visit Woodfire Bagels on Kingsway Drive. It’s a small place tucked in off the beaten path – and one with irregular hours, it seems, driven by its bagel-only sales – but one which generally sells out of its Montreal-style bagels regularly.

in fact, such is the interest in the Montreal version that a popular Kitchener bakery and café, Ambrosia Corner Bakery (closed until after Labour Day), has been ordering St-Viateur bagels and selling them on a weekly basis. This fall, the bakery will add bagel sandwiches to its menu. I’d be interested in trying some of those.

So, for Montreal bagels we are finely situated in the Region. Now, what’s really missing here, except for at a couple of specialty stores, is some good cream cheese. Let’s talk about that later.