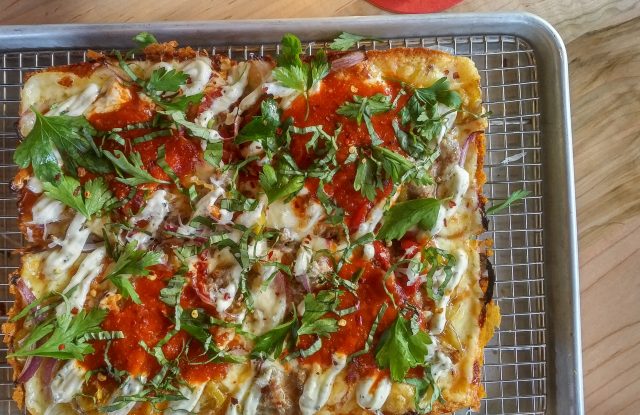 Both in the culinary world and here in Waterloo Region, Detroit-style pizza is relatively little known. But, holy smokes, is it ever good.

One of few Detroit practitioners in the region is Graffiti Market in Kitchener’s Catalyst137 complex on Glasgow Street at Belmont Avenue.

With unique interactive tables that are a story unto themselves, there’s a lot going on at Graffiti Market – the unique pizza included.

The primary cook behind the development and preparation of the thick pie is Brian McCourt, culinary director of the Ignite Restaurant Group, the company which owns Graffiti Market.

McCourt visited historic Buddy’s Pizza in Detroit and returned needing to make this style of pizza at Graffiti.

“We knew we wanted to do something different in the region, and the Detroit visit was a game-changer. The caramelized cheese crust, the light crispy and airy dough. It blew my mind,” McCourt says.

Like many foods, there’s a myth here: for Detroit pizza, it is that in the post-WWII years, cooks put together deep and meaty pizzas and baked them in rectangular pans with two- or three-inch sides that had been used in the automotive industry.

The certain truth is that the deep dish pans help create an essential element of the pizza’s quality: a thick, caramelized crust, about an inch deep, that is at once crisp and chewy. It’s truly delicious.

Detroit-style dough, in its Graffiti iteration, is high in moisture. “It’s 75 percent hydration, like focaccia,” McCourt says. By comparison, a standard white bread has a flour to water ratio at about 60 percent.

After fermenting for several hours, the dough is spread out in the deep pans – but only after the pans have been coated generously with butter and olive oil. “That means flavour and caramelization,” says McCourt.

There are seven pizzas on the current menu: from the simplicity of a Margherita (buffalo Mozzarella and basil) to the ten-ingredient laden Southern Hospitality (which, improbably, includes braised collard greens and coffee porter).

With a good dosing of cheese and San Marzano tomatoes (the sauce goes on top), the pie is cooked in a special Italian-made oven with bottom heat only.

Prices start at $20 for a small. But hold on: it’s an immense amount of food; the Can I Kick It (part of the menu’s Hip Hop thematics) pizza is four large slices that weigh 26 ounces – that’s over a pound and a half of food.

Finally, I need to add that, for me, a Detroit-style pizza, like that at Graffiti Market, reminds me of my Sicilian Nonna’s rectangular pizza, perhaps its closest relative. Thick yet crisp, the edges of the crust were nicely browned.

“It’s probably my favourite flavour combination for pizza,” says McCourt of the Kick It. “This is seriously the best pizza in the world.”