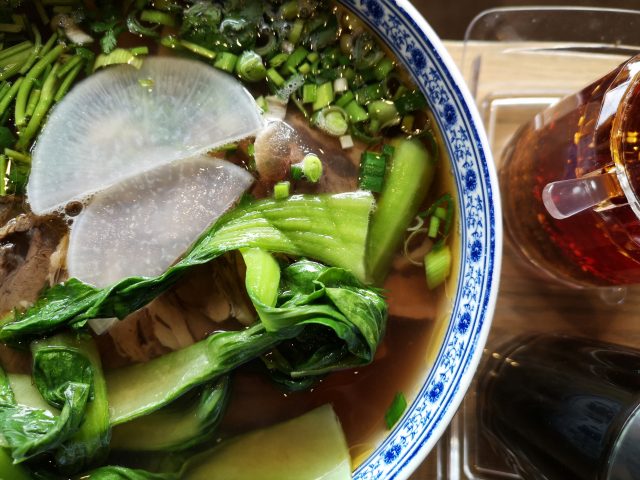 Located across from Wilfrid Laurier University, Omni Palace is a “small” chain of restaurants in China with 400 outlets. In Canada and based in Toronto, Omni is expert at preparing hand-pulled Lanzhou noodles, only a few of which we have here. Such shops are hugely popular in China with tens of thousands of noodle houses.

The process of making Lanzhou noodles is a magical thing: a rope of noodle dough is pulled, spun, whipped and whirled until it morphs into many single strands. You can see – and hear – the activity in the Omni kitchen.

Another distinguishing feature is that Omni bills itself as Halal, serving ethnic Chinese Muslims such as the more than 10 million Hui people who observe Islamic dietary law, along with the Uyghur, Dongxiang and Salar peoples, some of whom are part of tiny populations there. (Incidentally, Bogda Restaurant in Waterloo serves Uyghur dishes.)

The food at Omni, according to their menu, is similar to that cooked in Beijing and Sichuan. There’s an unclear translation on the menu – “Original Master Noodle Inheritance” – but it’s not hard to get the point.

Having made an impression on Jeremy Montforte and Freddy Hayes, the co-founders of Crazy Canuck, they tipped me off the soup’s quality, so I joined the restaurateurs at Omni to slurp noodles one afternoon.

“I order the original, thin noodle,” Monforte told me. “I like slurping them, but for me it’s the broth, for sure.”

He’s right. It’s a deep, rich and flavourful broth and not too salty. But I selected the broad noodle, similar, perhaps, to a wider Tuscan pappardelle. We ate some gyoza too.

“It’s consistent here,” says Hayes. “We come here once or twice a month. When my kids were younger, the cook would give them a piece of the dough to play with while we were waiting to be served.”

The traditional Lanzhou beef noodle is good, but the “wide-flat” cut ($11.99) is the way to go, according to Hayes.

“Order a green onion pancake too, so you can soak up any leftover broth,” he suggests. The broth is the base for those noodles, whatever cut-size you choose, along with daikon, slices of beef, cilantro, parsley and other herbs.

Elsewhere on the menu of nearly 70 items, there is a version of “haggis” as well as pita with lamb soup and marinated jellyfish with cucumber.

“You never leave unhappy with what you’ve gotten,” Hayes says. To which Monforte adds that Omni is “a welcoming, warm place.”