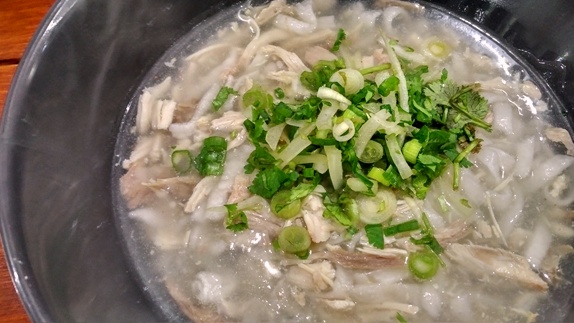 Thai food at Thai restaurants — and their “signature dish” Pad Thai — are hugely popular in Cambridge, Kitchener and Waterloo. I’ve heard that MiMO Thai Kitchen in Waterloo has recently revamped their menu. It’s a place worth visiting a second (and third) time.

I wrote about them after visiting in late-2017 (that story is below). If you get there before I do, let me know what you think.

]Previously published] A restaurateur friend introduced me to MiMO Thai Kitchen late last year. I’m very glad he did, although getting to the Spruce Street venue was – literally – a hell on wheels.

The roads in the Waterloo neighbourhood, a stone’s throw from King Street and University Avenue (and believe me, there were lots of stones around), were in complete subterranean-infrastructure upheaval during construction. Getting anywhere near the restaurant meant a risk of a cracked axle or an eviscerated oil pan. The roads are settled now, but then the restaurant demanded being gotten to, and I’ve since been several times.

What soon became evident – and which mimics much of the development around the universities where there is a captive audience of students – is that the new building model and business plan is pretty cunning: erect a high-rise apartment complex that will be filled with students looking for cheap food and rent the ground floor to inexpensive restaurants.

Ergo: students can easily tumble out of their apartment and into a restaurant without ever having to change out of their Walmart flannel pyjama pants, Hello Kitty slippers and goofy toques – that is, if they don’t want to Skip the Dishes and phone app it in. But what is revelatory is that there are few, if any, chain restaurant abominations here. There is surprisingly good food that is relatively inexpensive. Okay, so give one back to the students.

Inside, MiMO is long and slender – and stark. There’s a large area of bar-tyle seating, though the restaurant isn’t licensed. Long wooden tables, glowingly shellacked, are surrounded by simple chairs. The open quality and the minimal décor draw your attention to the half-dozen chalkboard menus. Order at the counter, pay, and they bring you the food. Menu items on the daily specials list are around the $10 mark.

Mussaman curry is a classic dish, and theories abound as to the name – some say it refers to Muslim; others to matsaman, a southern Thai dish. Either way, the MiMO version is a good one that is sweet and salty with beef, potatoes, carrots, galangal, lime and the creaminess that you can only get from coconut milk.

The “Five Flavour” dish with shrimp, broccoli and peppers seems a dish you could make at home — until you get to know that coconut milk. The spring roll appetizer has black mushroom and green onion with glass noodles.

A few dishes are both unusual and delicious: a ground chicken stir fry — pad krapow — with basil is somewhat odd in its presentation but the upshot is that it’s flavourful, nicely seasoned and topped with a fried egg. Basil beef is another solid dish, and I was hopeful for the sai ua northern Thai pork sausage with lemongrass and paprika: great flavour but over-cooked.

The favourite though is khao piek sen, tapioca noodles with fried garlic and chili oil. A dish of northern Thailand, it’s a simple and creamy bowl of goodness that I would, in fact, crack an axle to get to.