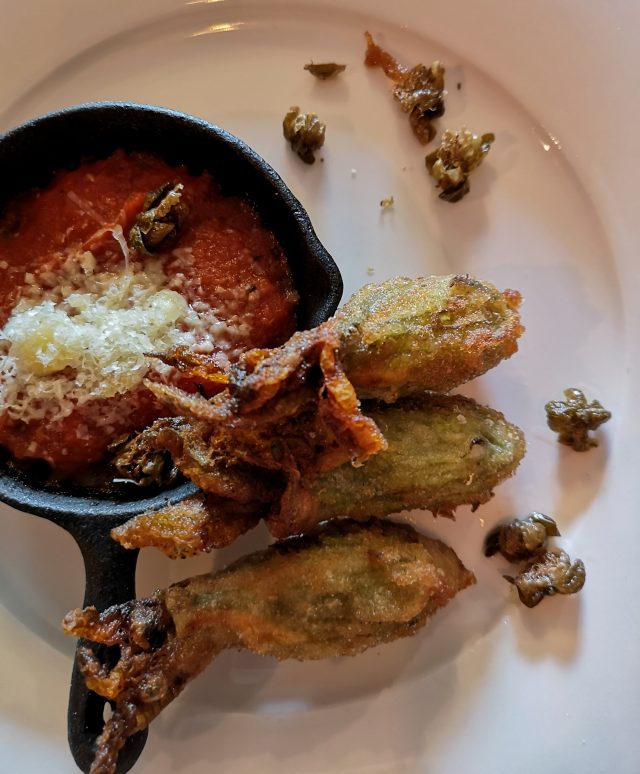 Self-described as a bouchon, a Lyonnaise-style bistro, Juniper has been open about five years. I found some good food here and some really lovely touches. I think it’s worth a drive to Paris to check it out.

I imagine the menu has changed and been pandemically modified since my visit, so I’m not sure if zucchini blossoms are available; the bone marrow could be, however: that’s enough to prompt me to return!

The dining room is open Tuesday to Sunday starting at 3 p.m. There is also some patio seating available. Please contact the restaurant for further details about your visit.

[published earlier]
I ate at Restaurant L’Express on Rue Saint-Denis in the Plateau area of Montreal a few years ago: if I had dropped from the sky into the dining room without knowing where I was, I’d have guessed it was Paris given the décor and accoutrement.

That extreme hasn’t been attempted by Juniper Dining Co. co-owners Andrea and Brandon Legacey, but they’ve created a comfortable and casual ambiance, including the crisp white linen and napkins decorated with elegant blue striping, that alludes to that character at their Paris, Ontario, restaurant.

“We can get local blossoms until the end of the summer while the weather is nice and warm and then we can get them imported until November. And I hope the end of November,” she adds.

Juniper, which will be celebrating a five-year anniversary in early October, has been inspired by French bistros and Lyonnaise “bouchon,” the latter a venue and style that boasts a preponderance of meat and heavy, fatty – and delicious – dishes.

“We always trying to do something different but still be approachable,” says Andrea Legacey, the restaurant’s chef. “When you see the dish on the menu, I want it to be intriguing.”

Broken down into small plates, sharing and mains, the menu is as she describes. Lunch and brunch include a classic bistro Croque Madame alongside a tenderloin burger. Small plates include Devils on Horseback (prunes stuffed with blue cheese and wrapped in bacon), duck poutine and fried smelts (which were just delicious and crisp) with sauce gribiche.

“We try to change the menu quarterly, but sometimes either we’re too busy or the weather dictates what we can do,” Legacey says.

I had headed to Juniper on a Sunday for the roasted bone marrow, something you don’t see on many menus. Juniper’s version is topped with caramelized onions, roasted garlic and blue cheese but, sadly for me, they were sold out from a busy Saturday night.

The zucchini blossom, a delicate alternative and just about as far as you can get from a carnivorous excavation of bone marrow, caught my eye.

Legacey describes the dish as simple with a lightness that really only comes from a feathery zucchini blossom. “We can get local blossoms until the end of the summer while the weather is nice and warm and then we can get them imported until November. And I hope the end of November,” she adds.

The blossoms are stuffed with ricotta cheese and aged Gouda from Mountainoak Cheese in New Hamburg. “I love that cheese,” Legacey says, who uses a thin batter with which to fry the morsels.

The presentation is at once attractive and simple and rustic: alongside the three stuffed blossoms is a small cast-iron pan filled with a nicely acidic marinara that balances the battered and fried dish.

There’s a deft touch with some fried capers, with their briny quality, which resemble a small, crispy flower bud as garnish.

“I want balance and a nice light fresh dish with nothing overpowering,” Legacey says.