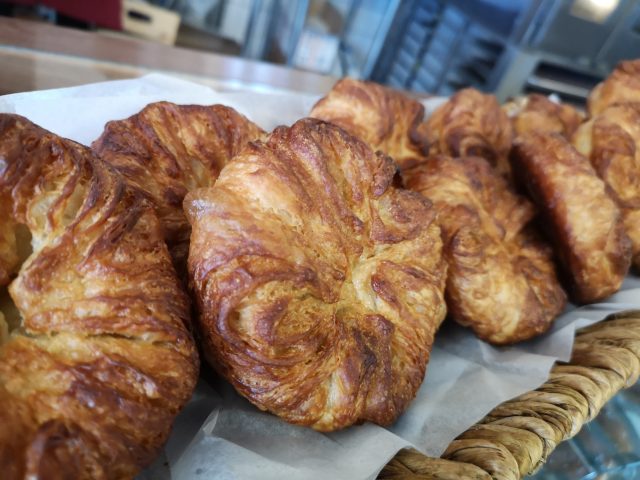 Update: Visit Ambrosia and look for their “bake-at-home”line of products: rumour is that it will include their world-famous kouign-amann!

Thanks to local baker and food entrepreneur, Aura Hertzog, I discovered the kouign-amann a few years ago. It’s simply a divine pastry.

When you make a bread, pasta or pizza dough, you use water to integrate the particles of the flour. With some elbow grease and some time, the activity produces quite a delicious result, as eating freshly baked and still-warm bread will tell you.

However, when you add fat to the flour, then you have something that is even more magical – pastry.

Into that magical category falls the little-known Breton pastry kouign-amann (pronounced “queen amahn”), the flakey cake that is likely made in only one bakery in Waterloo Region, Ambrosia Corner Bakery, a business that moved from Waterloo to the Central Frederick neighbourhood of downtown Kitchener a couple of years ago.

The kouign-amann is a member of a class of pastries called laminated doughs. Essentially a croissant with yeasted dough and butter, the kouign-amann has lots of sugar which helps produce a thick, chewy-crunchy and caramelized morsel.

“Traditionally, it’s about eight to ten inches in diameter and flat. The first time I had it in Montreal, I said, ‘Whoa! This is a really different taste and texture because of the caramelization,’” says Ambrosia owner Hertzog.

So, she started making them in a smaller version than that of Breton.

The difference in the ingredients comes down to ratio. “There’s way more butter,” says Hertzog. “There’s a lot more sugar too, so that when it cooks you still get a lot layers but not the big open layers like a croissant. You get that caramelization.”

The dough is shaped into a circle and then Hertzog pulls over the edges in four spots and gently pushes down on the pastry after it proofs. “It then looks like a flower,” she says.

Other true bakers in the area could make kouign-amann, but Hertzog cites a camaraderie and a network among them, perhaps like the ancient guild system. “There’s a respect that’s given,” she says. “I’m not making a cruffin, for instance, because that is Golden Hearth’s territory, and they’re amazing. But we sell their bread here on Thursdays.”

Customers unfamiliar with the pastry are immediately impressed. “You can’t really describe it until you’ve had one,” she says. “People are familiar with a wide range of croissants, but this is very different.”

However, kouign-amann are difficult and time-consuming to make, which is one reason they’re only available Thursday to Saturday. “We start making them on Monday with a pre-ferment,” says Hertzog. The many folds in the dough-making process are done by hand rather than with a dough sheeter. “Not to mention how expensive butter is now,” she adds.

As for whether she prefers the kouign-amann to the croissant, Hertzog won’t say. “They both have their place,” she says, answering as if she’s been asked to choose her favourite kid.

“The kouign-amann is definitely more of an indulgence. It also has a longer shelf life and tastes great even a couple of days later, unlike a croissant.”