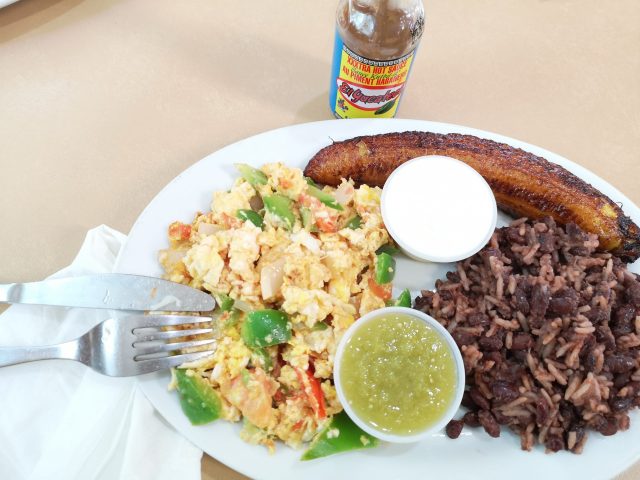 [Previously published]
Call it “My Breakfast with Andres.”

I joined Andres Guerrero at Pupuseria Latinos last week for a chat over a plate of scrambled. They came studded with peppers and onions, a generous portion of rice and beans and a plantain roasted to wonderfully and lightly caramelized perfection.

That was enough to eat, but I was compelled to add a side of the relatively new pupusas the restaurant is making: pulled chicken and cheese. They were equally delicious.

Pupuseria Latinos has been operating on Eby Street South between Charles and King for over a decade: time flies when you’re enjoying pupusas and tamales, it seems.

“I wasn’t expecting to be here for that long,” Guerrero says with a bit of a laugh. “But we’re happy we are still here.”

The restaurant is one of several venues serving what is essentially the Salvadoran national food that makes downtown Kitchener something of a pupusa epicentre.

More essential is that the pupuseria has been a stalwart through the ION construction mayhem. Sitting in the dining room, which seats about 25, you can hear the 301 whiz past a few urbanized feet away.

With their son, Andres and his wife Blanca, the latter the cook responsible for the many delicious dishes here, see to the operation of the restaurant. Most of the dishes are inspired by their home town of Quezaltepeque in La Libertad in the central-western part of the country.

“The dishes are from home. But depending on where you go, a big city, a small town or in the country, the breakfast is going to be a little bit different,” says Guerrero who came to Canada and Kitchener with Blanca in 1992.

The platter – the Deluxe Latino breakfast ($10.99) – comes as a combination of nicely moist scrambled eggs and chunks of veg that add crisp texture alongside Salvadoran sour cream, a delicious salsa verde and rice and beans (much like the unspiced Jamaican dish) called “casamiento.”

The word refers to “marriage” in Spanish – the intermingling of the different colours of the beans and rice representing a man and a woman (traditionally, at least) who become one when mixed together.

You can order the always scrumptious refried beans, but, Andres explains, this is more traditional to their region of El Salvador. Also popular are enchiladas and tamales: on weekends, especially market day, the restaurant can be packed.

Perhaps the defining, unique feature of the dish is the plantain, the larger cousin of the banana and a staple of Central and South American home cooking. When cooked properly, it takes on a luxuriant golden hue – Blanca gets the texture perfect, too, neither too firm nor too soft.

“The Salvadoran breakfast always has to have plantain and warm tortilla,” Guerrero says as he eats and sips coffee. “This is our food. It’s comfort food.”

Pupuseria Latinos is open Wednesday to Friday at 11 a.m., saturday at 9 a.m. and Sunday at 10 a.m. They are not licensed.