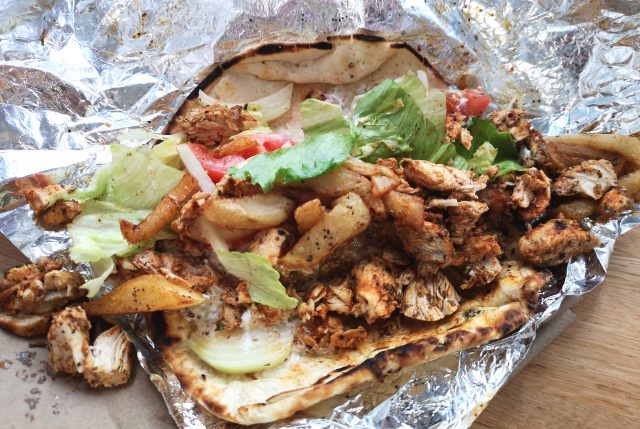 [Previously published]
You might miss the narrow entrance portico just about at the exact corner of Ainslie and Dickson streets in Galt, but inside the small shop near the Cambridge Farmers’ Market is a big menu of nearly 60 Greek dishes.

Greek Street Gyro was opened by co-owners Steve Sardelis and Kostas Kaperonis during the early hours of the pandemic – and they’ve thrived despite it.

“We opened on March 6 and Covid-19 hit on March 21, but we were able to stay open as a take-away only store,” Sardelis says.

Looking for restaurant space, Sardelis and Kaperonis headed west from Toronto’s The Danforth searching Waterloo Region for a year before settling on Galt. “We’re Greek street food, and we wanted to be downtown rather than a strip mall,” says Sardelis. “This location was small and fit our purpose.”

The menu draws on the flavours of Athenian street food, he says, but includes dishes such as moussaka, avgolemono soup and calamari. (Prices range from $5 to $20 for dinners with two sides and Greek salad.)

Their version of gyro is chicken breast with a paprika-rich marinade and spices. “It’s Asia Minor-inspired and probably our top seller, as is the donair-type lamb-beef mix called the Chicago gyro because it originated in Illinois.”