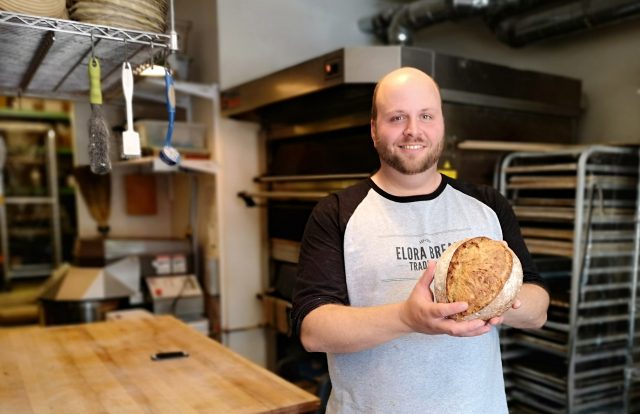 It’s early in the afternoon on a very bright, clear day on Metcalfe Street in the heart of Elora. The temperature, though the humidity is relatively low, is scorching as it approaches 30-degrees C., with the sun’s heat radiating assertively from the pavement to your face. It’s perhaps what the inside of a bakery — Elora Bread Trading Co., for instance — generally feels like when the ovens are running. It’s where bakery owner Greg Dove has just spent the last several hours.

Though he was born in Toronto, Dove, a Conestoga College culinary graduate, grew up in Cambridge. He’s done his share of cooking in and around Waterloo Region and environs, including at 20 King in downtown Kitchener and at The Church Restaurant, Stratford, where he worked with current Conestoga College instructor Amédé Lamarche.

Less than a year ago, the Guelph resident took a leap from employee to owner and settled into the baking business buying the Elora Bread Trading Co. He operates the business with three employees, including a delivery driver, and oversees producing about five different and finely crafted loaves a day, including traditional-method sourdoughs, and as many as eight on Saturday — usually a loaf with cheese and a fruit and nut item.

Also on the roster are items such as cinnamon buns and bialys, the latter a yeasty, chewy Polish bread similar to a bagel. They also serve light take-away lunches too.

From test bench to cold proofing

Originally, Dove attended Conestoga College for computer engineering before entering the two-year food and beverage program at the College, graduating in 2004. The 24-months in a culinary setting put into stark relief sitting behind an electronics test bench, he says.

“I loved cooking,” says Dove, now a Red Seal-certified chef. “So I started working at restaurants, and my entry level position was at East Side Mario’s. I think I was in that first generation of kids turned onto cooking by the Food Network. It just looked fun and exciting.”

And so it was.

His time in school, on co-op placements and working in a variety restaurants prompted Dove to dig in further. He began to think about continuously improving: “How do I excel? How do I progress?” he asked himself. He became the pastry chef at Peter Martin’s 20 King working with chef Darryl Haus (currently teaching at Conestoga’s Bloom Restaurant), after working that station at The Church.”It was a great time. Having that background got me into 20 King,” he says.

A day in the baking life …

When he was in his mid-20s, Dove headed west to Kelowna and Quail’s Gate Estate Winery. “That was the biggest moment in my culinary life. It was an open kitchen which looked onto the dining room and the patio which overlooked the vineyard and past that the lake and then onto the mountains. I often said, ‘I have to stop looking and cook!’ It was so beautiful,” says Dove.

That terrain, and the idea of fresh and local, made an impact on him. “It was really evident there. Farmers would roll through the back door of the kitchen and say, ‘Hey, I’ve got this particular ingredient,’ and we’d make specials out of it.”

“You think you have it, then something breaks”

Dove left the industry in 2009 after returning home to Cambridge and enrolled in finance — “I spent more money at Conestoga!” — a field in which he worked for five years before returning to the restaurant industry. “I missed the creativity of cooking,” he says. Call it coincidence, serendipity, or, to paraphrase Louis Pasteur, luck favouring those who are prepared, Calantha Elsby, the founder of Elora Bread, had just put the business up for sale. Dove and his wife had young children at the time, and launching back into baking became a sort of grounding. “When the kids were very young, sourdough was my coping mechanism,” he jokes.

Having a competence in and love of baking, the timing of the sale was perfect. Elora Bread has a strong retail presence in the town, he says, with a good wholesale customer base as well. Dove’s baked goods can be found at a number of shops in Elora as well as the Elora Mill and Elora Brewing, along with retail operations such as Goodness Me! Guelph and Vincenzo’s in Waterloo. “We’re also at Herrles right now. That’s brand new, and we’re happy to be there,” he says.

Now with the bakery for less than a year, Dove says it has been a constant learning curve. “Right when you think you have it, something breaks. Or somebody quits,” he notes. “Being an employer is very, very tough. I have an assistant baker, and she bakes three days and I bake three days. We don’t do croissants, and while I’d love to get into laminates and Viennoiserie, we just don’t have the space here with only 600 sq.-ft.”

A toasty hot day or not, those physical dimensions are a reminder of some of the basic culinary training he received at the College and something he took away as more than an abstraction but a concrete reality of being able to succeed and work with what you’ve got in front of you, he says.

“The culinary school and teachers like Philippe Saraiva made me aware that space was going to be at a premium in some kitchens and that there will always be deadlines that you have to make. There are guests and customers that expect it. It’s about work ethic.”

Other career you could have pursued?
Dove: Some other craft product. Cheesemaking?

Chef you’d most like to meet?
Dove: There are too many. And great bakers too. Thomas Keller, Jeffrey Hammelman.

Best footwear (for the kitchen or otherwise)?
Dove: Birkies in the shop. Otherwise, Rieker and Clarks.

What scares you in a kitchen?
Dove: A lack of focus.

Your greatest failed recipe, if there is one?
Dove: I just ran a cornmeal loaf with dried cherries and rosemary. That bombed hard.

Something that gives you great pleasure?
Dove: An oven full of nicely proofed loaves baking.

A favourite teacher you’ve had?
Dove: Chef Philippe (Saraiva) at Conestoga. And any others who didn’t sugar-coat the profession.

Do you ride a bike?
Dove: I can. And I should probably do so again soon …

A moment in your life you’d like to have back?
Dove: That’s a little personal.

For whom would you like to cook?
Dove: Industry friends.

Best thing about being a chef?
Dove: The creative outlet and the immediate gratification of that well-made something.

Most “dumest” purchase you’ve ever made?
Dove: 2013 Mitsubishi Lancer.

Favourite city?
Dove: None in particular.

TV chefs who annoy you?
Dove: I haven’t seen anything current, but post-2005 Gordon Ramsay is a bit cloying.

Would you describe yourself as sweet … or savoury?
Dove: Sweet.