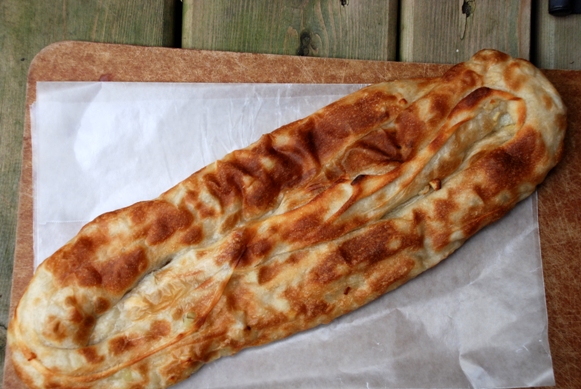 [Previously posted]
The burek – and its alternative spelling borek – is a Turkish, Middle Eastern and East European pastry often eaten as a snack from a small food stall or street vendor.

In one of its forms, phyllo-like dough is rolled into a long tube which is then overlapped and coiled beside or around itself.

Inside, the burek can hold a variety of vegetables like spinach, potatoes, and ricotta cheese and meats, either together or separately.

There are fruit bureks too, such as cherry. Bureks can be eaten either hot or at room temperature.

There is some history that indicates that the burek pastry was first used during the early Ottoman Empire in 1500 CE Istanbul, from whence it moved across Europe (and became pastries such as Hungarian retes and Austrian strudel and many others pastry-like foods).

That’s one of the very cool things I love about food: its universality, its communal nature and the way many people in very different parts of the world share its similarities.

The example pictured above was purchased at Ammar Halal Meats on Lancaster Avenue, Kitchener. It is made by Bosanski Burek, a Kitchener-based company.

Legacy Bakery on Weber Street East at Montgomery has a few varieties of burek.

While I haven’t checked in since the coronavirus, you can also purchase burek — they are delivered regularly and you can often find them still warm — at Italo Foods on River Road, Kitchener and at Eurocan Foods on Louisa Street.