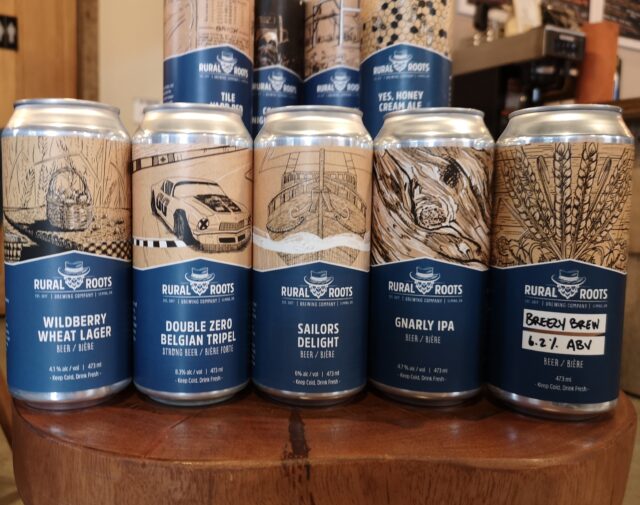 In the right weather, of course, the large open tent just outside the brewing facility is the epicentre at Rural Roots Brewing Company in Elmira: sure, the beer’s the thing, but co-owner Roger Lichti says people and community are key.

“We’re very people-focussed. We love craft beer and creating all kinds of different craft beer, but we’ve created a social place to come together,” Lichti says.

Brewmaster Lichti, his business card says “craftsman,” owns Rural Roots with his wife Sue From. Krysta Cronin is the manager and Bree Donaldson the brewer. It’s a two-year-old business that started small.

“It was a dream and a passion back in 1997,” says Lichti, a carpenter by trade who spent five years doing volunteer work around the world. “A seed got sown for me in England in British pubs. I’ve been all over the place, and a lot of what I’ve done has come to fulfillment here.”

Growth within the community has been steady, and though it’s slightly remote, Rural Roots has a following in Kitchener-Waterloo. “The craft beer world can find you,” he says.

As a brewery, they rely on the tried-and-true: beers that have a solid history and back story. “We have four or five core beers that are always available but in a more traditional style and not always the latest and greatest,” Lichti says.

There are roughly nine selections on tap: cream ale, Porter, Kolsch, an IPA and an Irish Red Ale. “Those are our core beers, and they are always around. We then have four or five that rotate. We’ve had about 20 of those so far,” he says.

As a carpenter, Lichti can build stuff – but beer is a little different than framing a house. “I was a home brewer and didn’t work at multiple breweries. It was a little hobby that turned into a passion. We asked will this stay a hobby or will we do something with it?”

With the help of other local brewers with the finer technical details, they did something with it: the tent is a hub for community gatherings around a beverage and live music. “That was lost with Covid, but we’re trying to do that every weekend now again.”

They’ve held a small, distanced music “festival” with eight bands performing over the course of the day. Food is by Never Enough Thyme; they use air fryers to make bacon-wrapped sausages and chicken wings.

Evidence of the community connection sits on shelves near the brewing equipment: hand-made mugs fill four or five shelves.

“Those mugs belong to our mug-club members. They’re regulars,” Lichti says. “I’ve gotten to know hundreds of people in my own community that I didn’t know.”

Peruse the labels on the beer cans and you get a sense of the rural roots of Woolwich Township: images of a Mennonite barn-raising, tractors, knotty barn board, bees, sap buckets and farmers. Lichti was wearing a “Farm On” t-shirt when I visited.

“This is something we wanted to do for our community,” he says. I grew up on a farm just outside of Listowel, and farming has been my background. It’s the roots of who I am, and Elmira is a rural community, although it is certainly growing and changing.”

Lichti’s personal reflections segue to a basic fact that we may forget given the ubiquity of craft beer and its unparalleled popularity: beer is an agricultural product made from barley, hops and yeast – and what every farmer wants in the properly timed amounts, water.

“Brewing beer is just a perfect fit for me and my background and this community,” Lichti says. “A typical night here is people gathering, but distanced, and chilling with a pint of Rural Roots.”