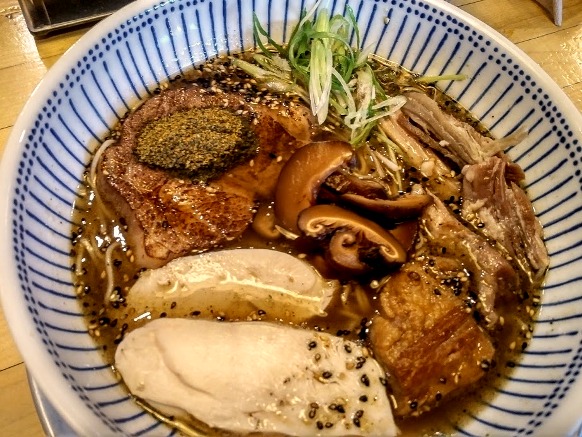 Inside, it looks a bit like something you might see on a Bourdain episode as the cook-turned-culinary-celebrity traipses around a city exploring its food and cultural idiosyncrasies.

It’s a mere and magical 500 sq.-ft. on Mcdonnell Street in downtown Guelph: it’s Crafty Ramen Noodle Shop — four heavenly words that add up to probably the best bowl of ramen I’ve had.

It’s the creation and hard work of Jared and Miki Ferrall, who met while both were working in the hospitality industry. Jared, originally from England, is a Red Seal chef and did his cooking apprenticeship in Vancouver. He’s lived in Guelph for a long time now, but the pair have also travelled the world quite a bit too, having spent nearly four years in Japan where he did some time in Ramsay and Ducasse kitchens in Tokyo.

Crafty Ramen Noodle Shop is the couple’s first restaurant, and it’s been open for about five months. It’s a unique spot and one with quality, character, integrity — and above all flavour.

Crafty Ramen: the name
“It just seemed to fit, you know,” Jared Ferrall remarks of the name with a laugh. “We wanted to stay playful but highlight that what we do is crafted. We have craft beers on tap as well.” And they also have, as a nod to all-things-Japanese, Sapporo. “That just seems to fit too. We had to do it.”

Rogues: the sociology of ramen cooks
Jared and Miki, both partners and business partners, travelled the length and width of Japan exploring food and attended Yamato Ramen School to boot. Having absorbed Japan and toyed with the idea (and came very close to sealing the deal) of opening a food catering van in Tokyo, they ended up in Guelph and share responsibilities for operating the restaurant.

Miki was overseeing things in the kitchen on this visit. It’s hard to see them as rogues, but they are certainly dedicated and have worked hard to build the business.

“While there are a lot of ramen shops in the Toronto area, here there is nothing like this,”according to Jared Ferrall. “We’re in the tradition of a true ramen shop.” He adds that Japanese shops are very innovative and chef-driven.

“Each wants to use the ingredients of the particular region. Actually, it’s the rogues of society in Japan that open up ramen shops. Everyone wants to do it his own way and has their own secret ingredients. That’s our style too. We don’t have seafood, for instance, and we use local producers for meats and vegetables. We’re doing it our way.”

Crafty Ramen, indeed driven by local ingredients, is a counter-service operation. It’s no frills, and that allows the talented people in the shop to focus on food preparation, not running dishes to tables. You order up front and sit at a stool.

Ferrall, it’s funny to add, points out that their small space is actually bigger than shops in Japan. “And there, you’d walk in and there would a vending machine where you would buy a ramen ticket. We couldn’t replicate that here. But people come in, order, pay, sit down, eat and leave.” I rather like that.

The noodles
With a machine imported from Shinagawa, Tokyo, Crafty Ramen usually makes one kind of thin noodle but on occasion fatter ones for specials, says Ferrall. Part of their philosophy is to do a few things very well. “The machines are a really cool little business,” he says of the Shinagawa contraption. “A father and son make them. You visit and they put it together for you.”

The Crafty noodles are a blend of Canadian all-purpose flour and a hard bread flour from K2 Mill (a 126-year-old milling operation in Beeton, Ontario, northeast of Orangeville), which, he says, is a stronger and more flavourful flour.

The other important element for good ramen is potassium carbonate and sodium carbonate — kansui, or lye water: it’s essential for a proper ramen noodle. “The alkalinity keeps the noodles from getting soft in the broth. It’s just wheat, water, kansui and salt. And they’re vegan.”

The broths
“All the broths are made in-house,” he adds: that would be vegetarian, chicken and a hugely delicious rich broth. “For that, Trotter’s Butcher Shop right around the corner supplies us with duck bones, pork bones and smoked pork trotters.” The restaurant uses a reverse osmosis process to extract maximum flavour in making the broths.

The decor
The shop’s decor is also crafted — re-purposed materials such as parts of workshop benches and old school floors from whatever they could find and done in an artistic way. “It’s crafty,” Ferrall says.

The menu and the ramen business
The noodle shop is first-to-market in Guelph and many other places around here too. Like I said, it’s small: 10 or so stools and a couple of tables do about 130 people a day over the 26 seats. “The busiest day was about 260. That, in fact, breaks down to nearly 10 turns, ” says Ferrall. “It’s hotter weather now and the students are gone, but we still do good numbers.”

On the menu are nine bowls of ramen ranging in price from $12-$16 for the meat lover’s. There was a new menu just introduced in mid-July. “The most popular ramen has been the meat lover’s,” he says. “There are three snacks, including a charred shashito pepper with yuzu and sesame and some drinks. We originally planned on having more snacks, but the kitchen wasn’t big enough.”

Delicate and light but packed with big flavour, the gyoza snack, a specialty of Miki’s and a family recipe that she has been making since she was quite young, is outstanding. There is also a spicy chicken, a surf and turf, a miso with corn and northern warmer with chashu.

The karaage, Japanese fried chicken, is delicious as well and is from mother-in-law’s teaching and recipe: crispy outside and tender and moist inside with a terrific crispy kimchi mayo. “The dish is chicken thighs marinated in soy, ginger and garlic for two hours. The marinade then becomes the liquid for the potato starch-corn starch batter. That’s how you get those little crispy bits on the outside,” he says. The dipping sauce is a “kewpie” mayo but with crispy bits.

The pork belly chashu is simply delicious as is the jowl, the latter seared off and cooked down with sake, soy, sugar, ginger, garlic and green onion tops for about three hours.

Five elements create a good bowl of ramen
Good ramen comes down to noodles, broth, fat, toppings and the tare, an ingredient that contains soy sauce, miso or black vinegar. That tare, a “flavour base” ingredient, bring saltiness to ramen along with added umami, and a touch of sweetness, sour, or spice depending on its composition. It can be a dozen or more ingredients which mean gigantic flavour. You might see a dollop of it go into the bottom of your bowl in ramen shops. Or at least you should.

Tradition is good, but the Ferralls use culinary training and foundational cooking skills and apply them to preparing ramen ingredients. It can be complex: days of brining and simmering kombu first in 60-degree water for an hour to infuse seaweed flavour; then the kombu is removed and shiitakes are introduced for an hour before cherry tomatoes get their hour. That takes time and training to hit the correct flavour notes — and for a bowl can still only be $12.

And yet, it’s not “authentic,” Ferrall is quick to stress, citing that simple fact that people forget when looking for the impossibility of “authenticity.” After all, we’re 10,000 kilometers from Japan.

Regardless, the effort is evident in the pork shoulder, which is brined for 48 hours and cooked sous vide for 24 hours. “It’s perfectly seasoned and really flavourful,” he says. “It’s the same process for the chicken. We use modern techniques, though we’re not modernist cuisine. Just good food.”

How to eat ramen
The protocol is: slurp the noodles and do it quickly. That’s not just fun; it has a functional application as well in that the quick and simultaneous aspiration of air with the thin noodles captures the broth so it doesn’t fall away. And it comes down to a simple edict: Don’t be precious about your ramen. Just slurp. It’s advice that the Ferralls strongly espouse. And at such a reasonable price, given the craft of creation, it’s a slurping process that Jared says is sustainable.

He says the young business is working and it is, of course, a lot of work to pull off successfully such intricate details of a dish that is traditional and comes with “expectations.” The obvious result in the bowl is delicious and the atmosphere and ambiance around you is perfect.

“It’s a successful model for business,” he states. “We’re trying to make really good food at a reasonable price point.”