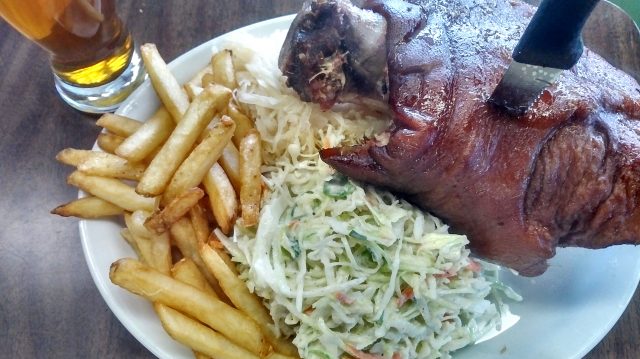 It’s a suitably porky time of the year while we are in the spirit of the recent Oktoberfest, albeit a very different one, so here’s a way to get out into the country and enjoy an historic dish that rings true of “Waterloo County Fare.”

It’s more than a myth—there’s a legend that has evolved around the gigantic smoked pork hock at The Olde Heidelberg Restaurant and Tavern.

The deliciously rich chunk of meat is part of the culinary history of the region, and it’s a phenomenon that includes tourists travelling from Toronto.

Roughly a decade ago, word got out in Toronto that the smoked chunk of pork demanded a visit, even from 100 kilometers away.

Soon, buses of hungry visitors de-boarded and packed the dining room during the summer, according to Heidelberg co-owner Gayle MacMillan.

“A Chinese gentlemen from Toronto ate here, and he wrote an article in a Toronto Chinese newspaper,” says MacMillan who has owned the business with husband Bob MacMillan for over three decades.

“That was about ten years ago. Since then, we’ve been crazy busy, and we get bus loads and large groups,” she adds. In summer, they’ll serve as many as 1,200 hocks.

Located a few minutes from the popular St. Jacobs Farmers’ Market, the Heidelberg, by virtue of its 1860 founding, indeed warrants the “olde” spelling.

The venue is part of a scattering of pubs and food establishments, especially in the region’s four townships, that can be described as serving “Waterloo County fare” or country pubs and taverns that serve dishes traditionally associated with Pennsylvania Dutch cooking. (I have to add parenthetically that with the closing of the Blue Moon in Petersburg, that number is sadly getting smaller.)

Such cuisine is meat-heavy—specifically pork—and that is highlighted by the Heidelberg’s “no trim” menu features of dishes of bread and meat only—there are no vegetables allowed on these plates: spare ribs, country sausage, pork hock, crispy broasted chicken and pigtails all foreground the meat.

Although it doesn’t brew its own beer any longer, the Heidelberg was one of the first on-site micro-breweries in Ontario, pre-dating operations such as the original Brick Brewing Company. You could once sit at your table feasting on pork hock while looking into the brewery facility in the next room.

Originally called the Great Western Hotel by its founder Heinrich Muller, the Heidelberg was a stagecoach stop between Kitchener and Millbank.

It’s now a stop for the hefty pork hock, also known as the classic Bavarian schweinsaxe. The cut of pork, located just above the animal’s ankle and just below the ham section, is prepared and smoked by Stemmler’s Meat and Cheese, less than a block away on Lobsinger Line.

In the large Heidelberg kitchen, the pork hock needs a low and slow braising to soften the tissues and break down the tougher cut into the tender, fatty and juicy rich meat.

Add to it some mashed potatoes and some sauerkraut, and you’ve got a dish that Edna Staebler would be proud of.

The popularity of the dish crosses all cultures, it should be noted. “A lot of other people like the dish too,” MacMillan says. “Not just the visitors from Toronto.”

Wherever you come from, come hungry.