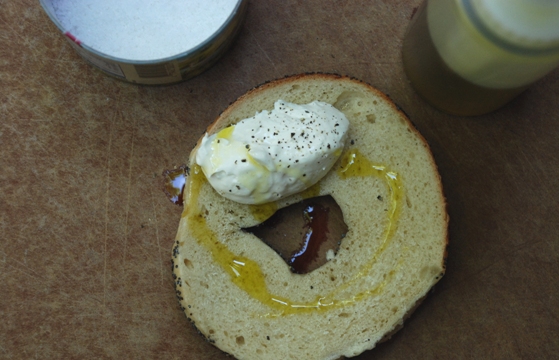 There are a couple of good bakers – and locally based businesses – making a decent bagel in Waterloo Region. Much harder to find is a decent and distinctive cream cheese made locally.

A number of purveyors sell cream cheese from some larger dairies; however, based on a family recipe I’ve been enjoying a cream cheese creation called kaimak (or kaymak) that is made by Kitchener’s Finest Sausage and Meats.

Traditionally a cheese of the near east and central Asia – places like Turkey, Serbia, Afghanistan and Greece, as well as Iran and Iraq – the original kaimak is a rich, creamy cheese with a bit of a tang that undergoes a long, slow cooking process of several hours just below the boiling point in shallow pans to achieve the right consistency and fermentation. I would love to find that happening here.

Similar to Devonshire clotted cream and its 60 percent fat content, the simmered kaimak is left to stand for a day or so until the thick “skin” layer forms. The result is a unique cream cheese that has thicker, fattier bits and thinner, looser ones.

Now, one of my favourite bagels is a poppy seed bagel with cream cheese. It turns out that a traditional kaimak of Afyon province in Turkey is made from the milk of water buffaloes who have been fed the residual paste of poppy seeds that have been pressed for oil. What grows together, goes together: I just imagine that when I’m eating my bagel and cream cheese.

While not made with water buffalo milk, you can find a version of kaimak at the Victoria Street Market on Victoria Street North and at Italo Foods on River Road East almost at King Street East and across from Chicopee Tube Park.