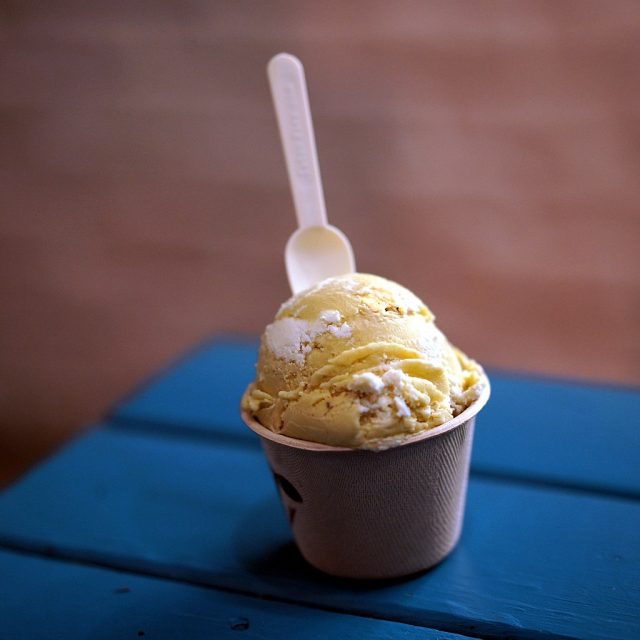 The very best ice cream is the one that has the best memories for you.

Plain ice cream or ones with wild flavours and crazy names come down to a very simple premise: it’s always nostalgic.

Rocky Road or Tutti Frutti or maple walnut or cookie dough, ice cream is very often about our past, a time in our distant or recent history. Even as much as we like the immediate rush of flavour and sugar and creamy texture on a hot day.

For me, it was cherry ice cream.

It was after a soccer practice when I was a kid, and we’d head over to a shop that was selling ice cream by the scoop. Hard ice cream and not soft serve. When I think about ice cream today, decades later, cherry still jumps to mind first. Maple walnut ice cream is a close runner-up.

As a foodstuff, ice cream has its own long and ancient history: the origin myths abound.

In 900 A.D., powerful Chinese nobles would have a part of their entourage scale mountains and return with ice and snow which would be mixed with rice, milk and flavourings.

While the Romans purportedly did the same, Marco Polo is credited, rightly or wrongly, with introducing ice cream to Italy after his travels to the far east in the 13th century. Gelato, of course, is synonymous with Italy and strolling along a pier or a piazza in the summer’s evening heat. Gelato is a rite of passage.

Making ice cream is pretty basic too. You need milk or cream (sometimes eggs, depending on the recipe), something sweet and a handful of flavourings, whether that is chocolate chips or mint – or both. You then need some way of freezing it: ice cream makers range in price from $30 to $10,000.

Many ice creams bought at grocery stores contain stabilizers that create texture and help prevent the ice cream from melting too quickly.

Perhaps the distinguishing character of commercial ice creams is something called “overrun,” the amount of air in the product.

Good ice cream should feel heavy for its container. (There’s actually a formula for figuring out the overrun in the product that comes down to 18 ounces per pint in ice cream that is 25 percent air.)

Scattered restaurants in the area make their own ice cream, and there are a number of specialty producers who make it too.

Four All Ice Cream in Kitchener, with a new “Scoop Shop” in Uptown Waterloo, breaks down their small-batch ice cream flavours into Childhood, Vegan, Classic and Foodie. The flavours have included salted caramel, strawberries and cream, tiger tail and more. They use local suppliers for their ingredients, including Eby Manor Farm for milk and Nith Valley Apiaries.

There are also Ice Cream 2 and Marble Slab ice cream shops in the area as well as Sweet Jesus in Waterloo.

By all means try these terrific ice creams, but if you want to make your own, the classic method starts with a crème Anglaise (a thin custard) base which can be flavoured in just about any manner. The recipe is below – you certainly don’t need a $10,000 ice cream maker.

Method
In a large saucepan combine the milks and the vanilla bean and seeds. Scald the milk: bring it to a slight simmer but don’t boil it. In a mixing bowl, whisk together the egg yolks and sugar until it develops a creamy texture and can form “ribbons.” Temper the yolk and sugar mixture by adding small amounts of hot milk and whisking vigorously (you don’t want scrambled eggs). While whisking, slowly pour the milk mixture into the egg mixture. Return the ingredients to the saucepan and set it to medium-low. Using a spatula to get at the edges of the pot, stir the custard constantly until it can “hold a line” when you draw your finger across the back of the spatula. Remove the custard to a container immediately and chill it. Use the crème Anglaise as per your ice cream machine instructions. The base can be made a day ahead.