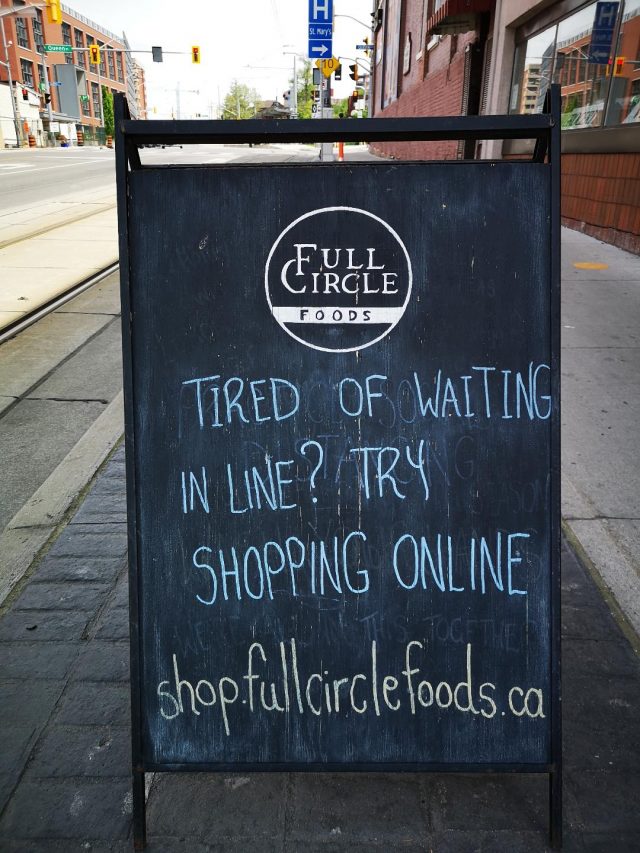 Full Circle Grocery and Bulk has recently moved to a smart new store at 16 King Street East, Kitchener, a couple of minutes’ walk from the original store.

Here is our previous story about the store as they adjusted to the pandemic:

The store has been around since 1981, in different locations and with other owners, but Sam Nabi and Julia Gogoleva have owned and operated Full Circle Foods in downtown Kitchener since January, 2018.

In a nutshell, Full Circle sells healthy, plant-based foods within a zero-waste shopping environment that is dedicated to supporting the local economy and its small-scale Ontario producers.

While Nabi and Gogoleva have made a number of changes to Full Circle in their relatively short time as owners, they would never have been prepared for the massive and cataclysmic change that was foisted upon us in March.

Like many businesses unexpectedly thrust into the circumstances, they have managed quite well, however, and have settled in to a new way of doing business, according to Nabi.

Here’s what he said about that adjustment process in our phone conversation a few days ago.

andrewcoppolino.com: Full Circle is fully ensconced in downtown Kitchener, isn’t it?
Sam Nabi: Yeah, it has a really long legacy. There are customers who have been shopping here since the very beginning.

Two years for you and Julia but in just a few weeks, a lot has changed. And I mean a lot.
Nabi: We had to move very quickly to adapt, both with the physical layout of the store and with ramping up our online ordering and payment and the ability for people to do contactless pickup.

What was it like in those first weeks?
Nabi: Well, we were scrambling and really looking for information that would keep our staff and customers safe. We’ve re-arranged the store a couple of times trying different things to see what would work. Everything we’ve been doing has been about physical distancing, but most of the store is open for browsing. We limit the number of customers in the store to three people at a time.

We are one part of a food system that is influenced by culture, health, land, economy, climate change, and so many other parts of society. We are continually learning how to provide food that supports a healthy world.

That’s a lower number than recommended by public health?
Nabi: Yes, based on our square footage. But we don’t want a situation where it’s difficult to maintain physical distancing. We want customers and staff to feel safe. It’s about peace of mind.

What about the bulk section – one thing you are well-known for?
Nabi: That was the biggest challenge. It’s half of our store and most of our sales.

Yes, I bought some juniper berries recently!
Nabi: It wasn’t feasible to cut out that part of the store, so we have a service counter [that partitions off bulk-section access] and staff there that get the items for you. There have been four or five iterations as we tried different ways of running the store.

I’ve been a couple of times. It’s sound and smooth. Has it meant more staff?
Nabi: No, it hasn’t. We haven’t had to lay anybody off and we’re very grateful for that. We still need to keep staff distanced and we limit how many are in the store at one time. We’ve shifted our hours a bit so staff can stock shelves and pack online orders.

What about revenue? What has happened to the bottom line?
Nabi: There’s been a bit of a bump in sales. It’s tough to parse out because this period [of the year] usually has higher sales for us, but I would say people are eating in more and baking more. There was a huge demand for yeast and flour and we had to scramble. The revenue has gone toward inventory so we can be a reliable grocery store for people.

Have supply lines settled?
Nabi: For the most part, they have evened out. We have really strong relationships with individual suppliers – almost 100 – from all-purpose groceries to local farmers. Our egg farmer was able to supply us every week due to demand. Our olive oil supplier, if we call him one day, they’ll be here the next day. We’re resilient.

What have you been hearing from customers – from two or three metres away?
Nabi: People have been getting excited about doing some baking. They’re trying new recipes and being creative.

But what about more philosophically?
Nabi: We hear a lot of gratitude. They’re grateful to be able to order online and walk here to pickup. We meet a need in the downtown neighbourhood. I think people are recognizing the value of that more and more.

Those older neighbourhoods like mine, just outside of the core, had them back in the day.
Nabi: I’d love to see every neighbourhood have a store of our size. It was a value Julia and I had before the pandemic, but people are seeing another reason why it’s useful. You can stay within your immediate neighbourhood and shop in a safer way.

What’ve you learned about your business? Events have prompted businesses to reflect.
Nabi: There has been a lot of change. It’s felt good to have adapted the way we did. We brought in a lot of changes when we bought the store, including adding more vegetarian and vegan foods. Every time you make a strategic decision, it’s taking a risk in terms of changing the status quo of things. I think those changes gave us some confidence and helped prepare us — at least a little bit — for the changes we needed to make because of the pandemic. We took a deep breathe and said we’ll be able to figure out a solution.

Is there a silver lining in this terrible time.
Nabi. Yeah. We’re lucky that we are in a business that is essential, and we provide food to people. It’s more work for the same service we provide and longer hours, but we’re happy about the way things are unfolding. Considering the circumstances, of course.