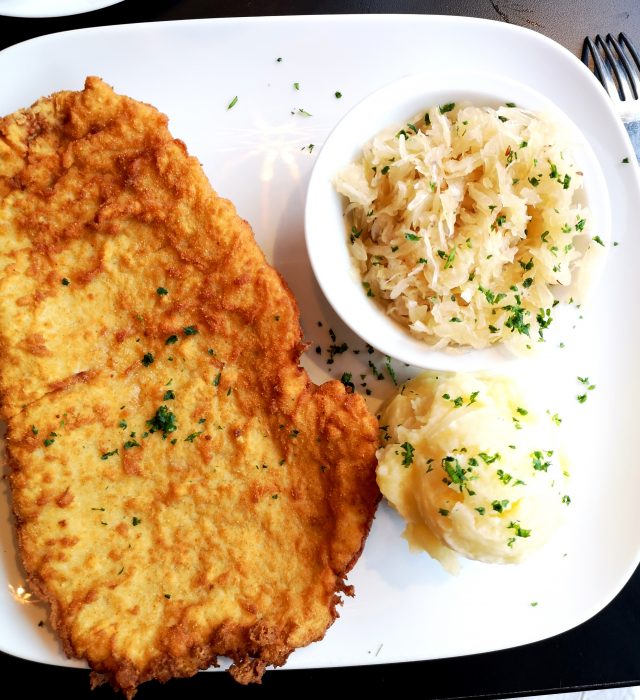 Waterloo Region’s annual beery festival Oktoberfest didn’t really happen this year (nor did it in Munich), but as October wanes, we do need to do a shout-out for schnitzel.

(It was a real shame to see that Two Goblets in downtown Kitchener has closed.)

In just the past few weeks, in fact, schnitzel has experienced a bit of a rebound with a couple of local restaurants — not to forget what’s at our German clubs — adding it to their menus: check out the new Crowsfoot Smokehaus in Conestogo and the newly re-designed Stone Crock in St. Jacobs for delicious Germanic dishes.

In this region, we can eat schnitzel year-round … and we probably revel in the fact because it’s so delicious.

But riddle me this: When is a schnitzel like a piece of cloth? Well, when it’s a variant of “Schneider,” a name that resounds mightily in these parts.

According to my friend and local etymologist Mark Morton, the true sense of it is that weiner schnitzel, the slice of veal, pork or chicken egged and breaded into a cutlet, derives from this same word “schneiden,” which is the German verb “to cut.”

It is from the word schneiden that the proper name Schneider evolved – ergo, a schneider is the word for a tailor who works cutting fabric and cloth and selling garments. So, Mr. and Mrs. J.M. Tailor would be the same as Mr. and Mrs. J.M. Schneider in the English-German two solitudes of Kitchener.

Recently of course, on Courtland Avenue East, a long-standing and founding Kitchener business of some 120 years – the former Schneiders (and then Maple Leaf) processing plant – was razed, leaving a huge hole in our culinary and cultural history.

But celebrate it by eating schnitzel! Tailor or Schneider, have a slice of schnitzel and toast Kitchener’s rich food history.