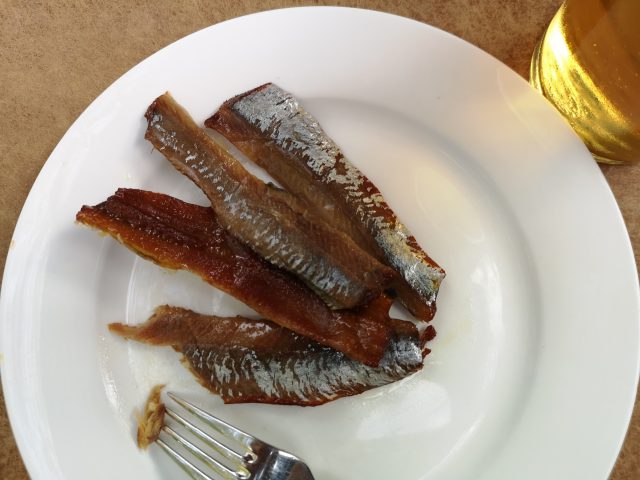 [Previously published]
Canada’s is a cuisine of regions, a smorgasbord across the country that runs the gamut from Nanaimo bars, prairie oysters and smoked white fish to poutine, the Halifax donair and the inimitable Jiggs dinner.

Such dishes are well known, but others less so. That is the case with Maritimes “Digby Chicks.”

These smokey and salty morsels are available at T & J Seafoods, a 53-year-old landmark in Kitchener’s Cherry Hill neighbourhood near the border with Waterloo.

Let me correct and refine that previous definition: these smokey and salty morsels are herring fillets that are very smokey, extremely salty and quite oily.

And I love them.

They’re similar to a kippered herring (usually a whole fish), the kippering process being that of smoking and salting and once extremely popular as a British working-class snack during the late-Victorian and Edwardian eras.

As chicks, their preparation is not limited to Digby, according to Brian Jardine, seafood manager and T & J Seafoods.

“You can find them from the Gaspé through to Nova Scotia. They were a bar snack, like peanuts, though very smokey and very salty,” Jardine says.

Digby sits in the southwest of the Annapolis Basin in Nova Scotia and adjacent to a geographic feature known as the Digby “Gut,” which connects to the majestic Bay of Fundy.

There is no little pelagic irony to the fact that two extremely different bits of seafood are found in each other’s backyard: on the one hand, there’s the fish used to make the salty Digby chick; on the other, the beautiful tidal seascape that is background to Digby’s claim as “Scallop Capital of the World” – and home to that wondrously sweet and succulent bi-valve mollusc.

Atlantic herring, at least in the past, has been one of the ocean’s most populous species. They grow to about a foot-and-a-half in length.

I love them with a glass of beer and a good chunk of heavy dark bread and some tangy mustard. I can imagine them as a good breakfast morsel too. I think they’re an invigorating jolt to the taste buds.

If it’s not a bar snack, it can be chopped finely and added to other dishes, including Chinese and Japanese dishes that are looking for a salty, fishy component (a lot of herring, in fact, makes it way to Japan where its roe is in demand).

Like the history of cod on the east coast – such an abundant species hundreds of years ago that you could, as the myth goes, dip a basket into the cod-roiled waters and just scoop them out – the herrings’ abundance, though now in decline, at one point led to the question: “What do we do with them all?”

Jardine says there used to be “bijillions of them, so on the east coast they added smoking and salting to the arsenal of fish preparation. Herring remains an important part of the fisheries off southwest Nova Scotia and the Bay of Fundy and are worth tens of millions of dollars annually.

The name is interesting too. Digby was named for British Admiral Robert Digby who, at the end of the American Revolutionary War, led nearly 2,000 United Empire Loyalists from New York to a small settlement that eventually was re-named Digby.

“Digby chicken” was apparently some wag’s wry description of a salty bite to eat when things were otherwise meagre at table.

Acquired taste? You bet. Even Jardine admits he has a slightly difficult time with the salty fillets, which also spend a long time in the smokehouse.

“I’ve tried to like them,” he says adding a qualified bit of diplomacy. “They do have a pronounced flavour.”