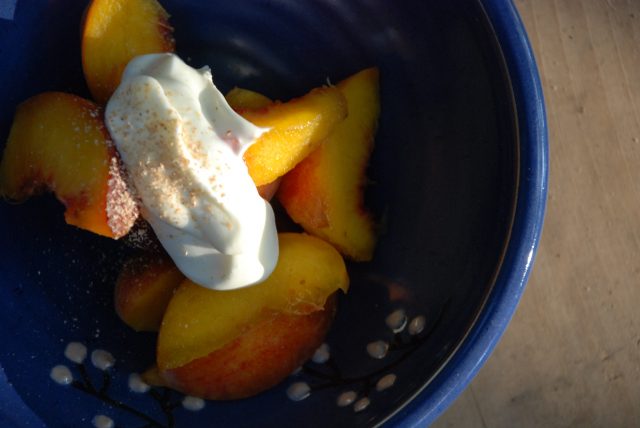 Having home-made crème fraîche available in your larder need not be for gourmets only. In fact, even with the intervention of Louis Pasteur, it is a low-cost and easily prepared alternative to expensive versions sold in gourmet markets.

Crème fraîche is a thick cream, satin in texture, nutty and tangy in flavour. Its viscosity can vary from a sour cream consistency to that of margarine. If we could easily get unpasteurized cream with the necessary bacteria in it, we could get crème fraîche naturally.

This is where Pasteur comes in.

As his name indicates, Pasteur is responsible for pasteurization, proving the germ theory of disease, and developing a vaccine for rabies.

He did research in Dijon, famous for its mustard of course, before moving to Lille to become the dean of the faculty of sciences. He was there, primarily, to solve the problem of beer and wine spoilage, a major economic concern in France in the mid-1800s.

In working with milk, Pasteur changed our world (and crème fraîche) forever: our cream is pasteurized and does not have fermenting agents in it. It has been heated to 80 degrees C for 30 minutes and then quickly cooled. This important process, while removing nutrients, kills bacteria responsible for typhoid fever, tuberculosis, and polio.

Crème fraîche is less tangy than sour cream, has a higher fat content and, depending on the ingredients used to make it, has fewer additives and stabilizers.

So, rather than buy an expensive crème fraîche, make a delicious—and simple—home version yourself.

In a glass container, add to 1 cup of 35% whipping cream two tablespoons of buttermilk. Cover the dish and let it stand at room temperature for between 8 to 24 hours or until the concoction gets quite thick.

Stir the crème fraîche and refrigerate.

This simple preparation can be stored for up to 10 days in the refrigerator.

Because it won’t curdle, crème fraîche can be added to soups and sauces, but it is also a smooth, tangy topping for fresh fruit and desserts such as cobblers, crisps, and clafoutis, the latter the fruit and batter dessert of the Limousin region of France.

But that’s another story.