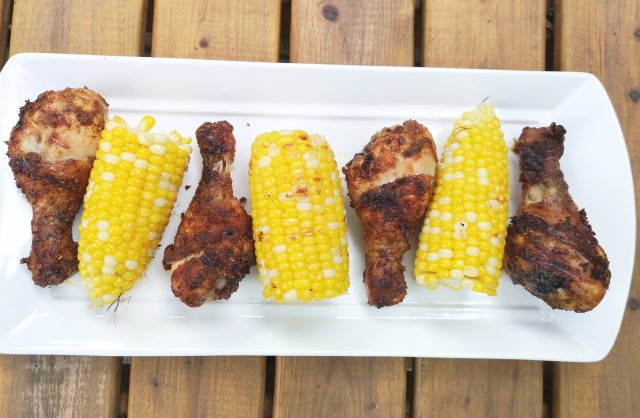 Waiting for a thunderstorm that never arrived — though the tree limbs were waving excitedly and the wind was roaring — I threw together a bite to eat hoping we could have supper before being rained inside.

In a way, the dinner was a sort of combination of two cultures, North American and Indian.

Not wanting to heat up the kitchen by booting up the stove-top to boil a large pot of water to cook corn, we cut the fresh Ontario cobs in half and with only a half-cup of water cooked them in the Instapot: it took just a few minutes and was both water- and heat-efficient.

Then, I dropped a knob of butter into the hot pot and swirled the corn to coat it. They ended up on the barbecue for a few minutes to finish — where a half-dozen chicken legs had been slowly cooking for 15 or so minutes.

As one of the “three sisters,” corn has a long history in North American, and I’d loosely call the chicken “tandoori” in style, even though the legs were not cooked in the rocking hot tandoor oven that is a feature of Indian restaurants.

With such equipment, seasoned, skewered food is lowered into the round clay oven and cooks quickly and beautifully. Naan is similarly placed onto a small “pillow” and set against the tandoor oven wall — to delicious result.

I, of course, don’t have a tandoor oven, so the closest to tandoori chicken I could get was in the seasoning, from ground coriander and cumin to the Indian spice blend garam masala and several other spices (I didn’t have yogurt to add to the marinade).

The chicken had been marinading for about an hour, and when it was finished on the barbecue the corn had gotten just a slight roasting. It then got a generous sprinkling of salt.

The meal was simple and trouble-free and completed by a pint of beer. The only thing missing was the storm.