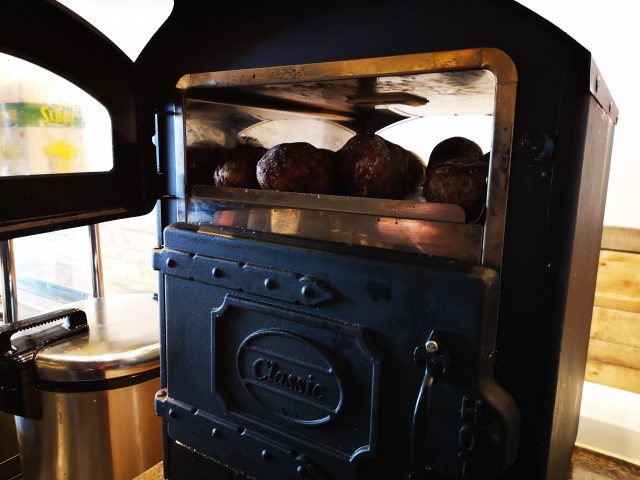 [Previously published] Steve Jobs’ reach and his insinuation into nearly every aspect of our modern lives was long ago sealed with the revolutionary series of the iMac, iPod and iPhone.

But what of the iPotato? Well, that’s the realm of Hassen Shinwary.

The humble baked potato that is the main player of the eponymous iPotato is a delicious and rather fun morsel of a spud slathered with butter and stuffed with cheese and virtually any assortment of shawarma ingredients, or otherwise, that you like.

Shinwary explains that the “i” in the restaurant’s name drew at least a bit of inspiration from another thread of pop culture in addition to the smart phone.

“It stands for incredible,” Shinwary. “When shawarma was mentioned by Ironman in “The Avengers” and the Incredible Hulk was around, I had the idea to call it Incredible Shawarma.”

iPotato, an off-shoot of the iShawarma restaurants that Shinwary has opened, has been serving customers since May. Located in the hodgepodge that is that chaotic outdoor food court next door to University of Waterloo, iPotato sends out a pretty good version of this relatively little-known street food.

Known also as a jacket potato, the humble dish is a culinary mainstay in Great Britain, according to Simon Dowrick. Dowrick works for a local sign, print and graphics company, and we met for an iPotato lunch recently.

“It’s a thing. In England, we stuff it with cheese and baked beans and other ingredients. There’d be a jacket potato stand like we might have a hot dog stand here. The potatoes are cooking right there in an oven,” says Dowrick who grew up in Cornwall.

“For a few quid (about $7) you’d get a big potato, crispy on the outside with a mountain of grated cheese. It’s a meal.”

At iPotato, it is indeed a meal (prices start at $3.99). In fact, I brought a veggie version home and weighed it: it was over a pound. The combination of the crispy baked skin and its mouth-watering ping of salt along with a liberal dosing of salad bar-like toppings is quite satisfying – for just a potato.

To cook the potatoes, Shinwary imported what he calls “a top of the line” cast iron oven that sits on the counter and is used to bake the spuds. It’s a simple process: they are lightly coated with vegetable oil, salted and then baked in the oven for about an hour.

“It’s popular in Germany and has become a trend in Turkey,” Shinwary says. In the latter country, the home to the delectable doner, the creation is called kumpir.

While the potato of choice is the Russet, a good variety for baking, size matters: when it comes to the vagaries of sourcing potatoes, Shinwary has to search to find consistent and good quality tubers that have the same shape and size. “We search for a 60-count Russet potato,” he says of the ideal.

A filling and starchy bite, a kumpir or stuffed jacket potato is a blank canvas or foundational base on which to build your own meal; it’s especially good for customers looking for vegetarian options. Make sure you try their fresh-baked Turkish-Iraqi bread too.

While the usual shawarma, poutine and fries are part of the iPotato menu, Shinwary is contemplating rolling out different ingredients to load onto the potato, many of which are traditional jacket potato, or kumpir, toppings.

“We have more cards that we haven’t shown yet and as demand continues to grow we could add Russian salad, sausage or couscous,” he says giving just a few examples. “The opportunities are endless.”

I think that’s what Steve Jobs believed too.