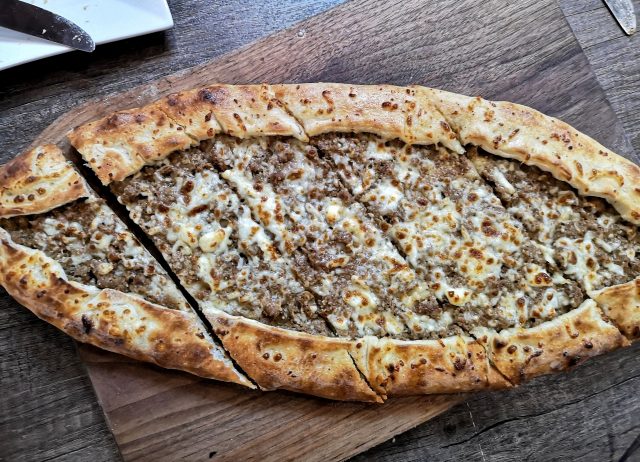 [Previously published]
Nedal Alhares was part of the group that opened the popular Arabesque restaurant on Victoria Street several years ago. It became an immediate destination for food lovers looking for Middle Eastern dishes, and it continues to be popular today.

Alhares then brought his entrepreneurial skills and love of Middle Eastern cookery to University Avenue just about at Weber Street, across from the new Waterloo campus of Conestoga College and its culinary school: the playfully named Chic Pea Middle Eastern Kitchen was born.

The name connotes both freshness and quality, the garbanzo bean, or chick pea, an indication of the vegetarian options that mark the menu. But would it be just as easy to say the restaurant is stylish and tasteful—chic, in other words? I think so.

Inside is open-concept space that holds booths and large wooden communal tables that can seat just over 100 customers. A quaint characteristic of the restaurant is the large families who visit and sit at those tables to take a meal — at least pre-Covid-19.

A section of one wall of the dining area is a glass room which holds, in its Rube Goldberg-majesty, a wheel-like device with beds of charcoal that is a rotisserie. Elsewhere in the kitchen, you’ll notice flames and sparking embers as meats are grilled.

The menu includes about a dozen starters (or mezze; the fried kibbeh is particularly good), soups and salads, seven or eight entrees and grill dishes, sandwiches (including the popular shawarma wraps) and of course “Chic Pea Charcoal Chicken.”

“Everything here is fresh. We have a butcher on site,” Alhares says. “It’s our own recipe for the dough too.”

One corner of the menu is dedicated “Turkish Pizzeria,” which includes five or six varieties ($8-$17), including sujuk, a unique sausage blend of ground beef and spices, which is a staple of the Middle East and Balkan regions of the world.

Of course, just about every cuisine on the planet, east and west and north and south, has some sort of pizza-like, dough-based flatbread that is loaded with toppings and baked in a hot oven.

“The sujuk topping is from beef that we cut and grind here at the restaurant,” Alhares says, noting that it is essentially “organic” (though it is not certified organic). “We then add our blend of ingredients that basically includes garlic, coriander and salt and pepper.”

The mixture is partially cooked and the oil drained. The balance is struck and the cooking finished when the pizza is built and baked in the oven.

Pizzas at Chic Pea and other Middle Eastern restaurants are elliptical and perhaps shaped like a boat with gunwales and a slender fore and aft, to use a nautical image. The dough presents at your table with a slightly bubbled and wonderfully charred appearance and flavour.

And it’s a meaty and hearty dish that Alhares is eager to present to new customers at the restaurant.

“This is unique,” Alhares says of the sujuk. “We look forward to serving it to our guests.”