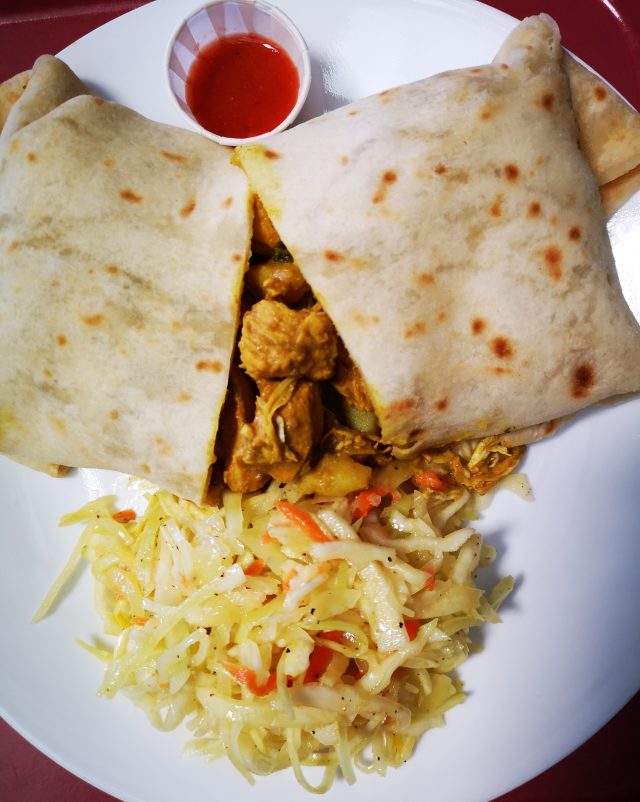 [Previously published] Though it’s a simple flatbread, roti has a complex (and in this space a necessarily abridged) history that spans a couple of continents and a few cuisines over hundreds of years. Those factors in fact add flavour to the dish.

One of many flatbread variations you find throughout the world, roti arrived in colonies around the world, including in the Caribbean, from the Indian sub-continent. The indentured labourers brought there in the mid-1800s to work at plantations and build infrastructure cooked  their national foods which soon became staple dishes in many countries.

Roti refers to both the large thin disks of unleavened bread, torn and used to dip into curries and stews, and, in an invention of the 20th  century, rolled as a wrap stuffed with various ingredients, both meat and vegetable. In either case, it is very tasty.

It’s a feature dish at The Caribbean Kitchen in Kitchener Market, which operation Nicky Adams took over in 2017. (Adams says you might see original owner Esselyn Bell, who ran Caribbean Kitchen for many years, behind the stoves helping on busy weekends.)

“This was totally new to me,” says Adams of her cold introduction to the restaurant business. “I was in the banking world for 13 years, but I was looking for something different and I like cooking. So, I came down this road.”

She kept the majority of the items that were on Bell’s menu – regular customers, she says, have loved Caribbean Kitchen over the years – and made tweaks here and there, adding keto and gluten-free options. That’s par for the course these days at any restaurant.

A lot of people come for the ackee and saltfish breakfast, she says. “That’s actually a conversation starter,” adds Adams who has Jamaican background. She calls it the national dish that sees ackee, a sort of pear-shaped fruit that ends up looking like scrambled eggs when cooked, paired with salt cod.

It’s a popular dish on a busy Saturday, market day, according to Adams. That’s generally true for all the food vendors in the Market’s upper level.    Breakfast is served morning and afternoon; it’s about a half-dozen dishes. The lunch menu is another ten or so items that feature the gamut of curries: chicken, goat, shrimp and chickpea potato.

There’s jerk chicken and oxtail (the latter the most expensive menu item at $17) as well as four roti dishes ranging in price from $13 to $16.

Side dishes include rice and peas, plantains and Jamaican patties. “About 85 percent of the time, students from Cameron Heights will get patties,” she says.

The curried chicken roti ($10) is substantial: I ate one half and saved the other for lunch the next day. It starts with seasoned chicken breast marinated for a day before being sautéed with potatoes and spices.

“The roti flatbread is made ahead of time, because it’s labour intensive,” Adams says. “For filling, there’s vegan with chickpea, curried shrimp and jerk chicken roti.”

The roti itself is wheat flour made into a dough which gets rolled out very thinly. The dough is cooked on a tawa, a large flat pan that’s used in many cuisines, from those of the Indian sub-continent to the Balkans and the Middle East, where it might be referred to as a saj.

So, Caribbean Kitchen rolls up a roti wrap that’s delicious at the same time it rolls out a bit of culinary history of shared ingredients and techniques.