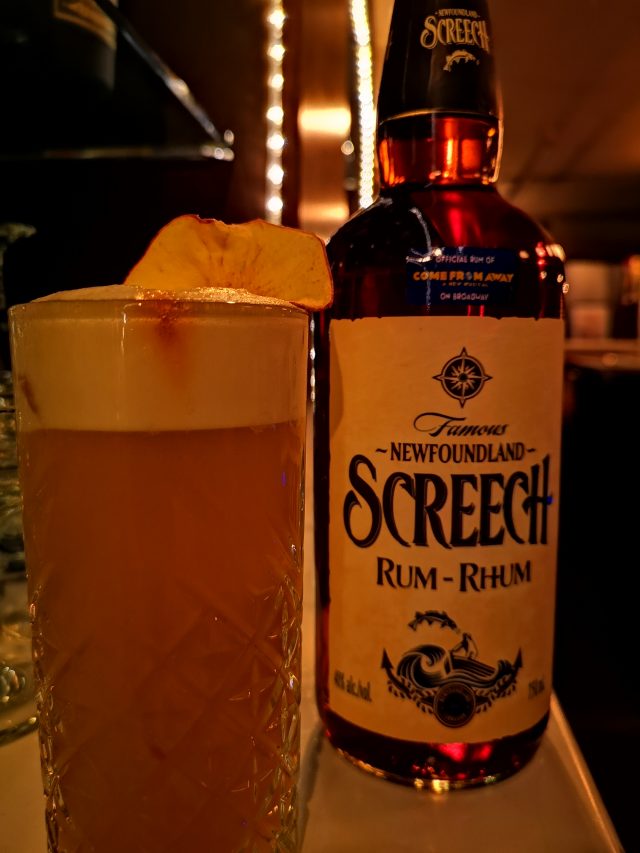 Sugar Run has recently started a collaboration with Swine and Vine, the quaint restaurant and cocktail bar on Lancaster Street. They’re sharing food and beverage ideas as they continue to work hard against the pandemic obstacles. Please consider supporting both places as you are able.

[previously published] It’s a very cool space, somewhat dark and stylistically non-descript though of the era – it’s a “speakeasy.”

Sugar Run Bar, its main, secretly marked entrance (look up for the Sugar Run logo) located in an alley and beside the back door of a popular breakfast spot in the proximity of the Benton Street parking garage in downtown Kitchener.

The concept of the basement Prohibition-era bar was created by business partners Justin Vail and Kypp Saunders, the latter of whom was the original owner of White Rabbit in Uptown Waterloo.

That said, this place knows cocktails.

Sugar Run’s cocktail menu – about eight deep in its own signature house cocktails – is curated by Dan Collins, that latter a name quite fitting for one who creates drinks.

“We’re a rum-focussed bar so I really wanted to build each cocktail around that. We keep the sugars minimal, and focus on the flavours of the particular alcohol,” Collins says.

The beverage ingredients at Sugar Run, like their aged bitters for instance, are made in-house.

Collins, South African-born and with a good knowledge of many other cultures from his travels, has bartending experience at Langdon Hall and Proof Kitchen and Lounge.

He’s also spent some time in Newfoundland, where his father lives. He was intent on proving a good cocktail could have Screech rum in it.

The drink is a variation on the classic Dark and Stormy: “East Coast Seas.” That’s a creamy and rich, combination of Calvados, Screech (a rum blended and bottled in Newfoundland), maple syrup, citrus, egg whites and ginger beer.

“I was Screeched-in while visiting my dad,” Collins says. “I was asking about the Screech, but the locals said that other than the during ceremony (in which you also kiss a cod) don’t drink this rum. But I actually didn’t mind it.”

Collins then set about to create a cocktail that would show Screech can make a good drink – and he’s done it. “That’s how the East Coast Seas was born here.”

There’s a good balance of flavours, from bitter and tangy to slightly sweet and spicy. The combination of the ginger beer and the egg whites gives the drink a frothy “head,” which imitates the waves of the Atlantic Ocean crashing into foam on the beaches of the Rock.

The cocktail has pleasant soft textures that are countered by the crisp wafer of dehydrated apple that is a garnish and picks up the Calvados theme.

What I like about Sugar Run cocktails in general is they are not overly sweet drinks. That includes “The Captain OG” with Angostura bitters and spiced rum and smoked pineapple and the Tortuga with mezcal, vermouth, chai tea and house barrel-aged bitters.

Otherwise, the rum list, at the time of writing, is two pages long (and includes The Newfoundland Distillery Co.’s “Gunpowder and Rose” rum made with the Rock’s sea salt and kelp). There are also a dozen wines, plus three sparklers.

Sugar Run is keeping the password a secret because they want to sustain the playful speakeasy motif at the bar.

If you spend some time on the bar’s various social media platforms, I’m sure you’ll find the password easily enough. That the Screech are a good part of the fun.