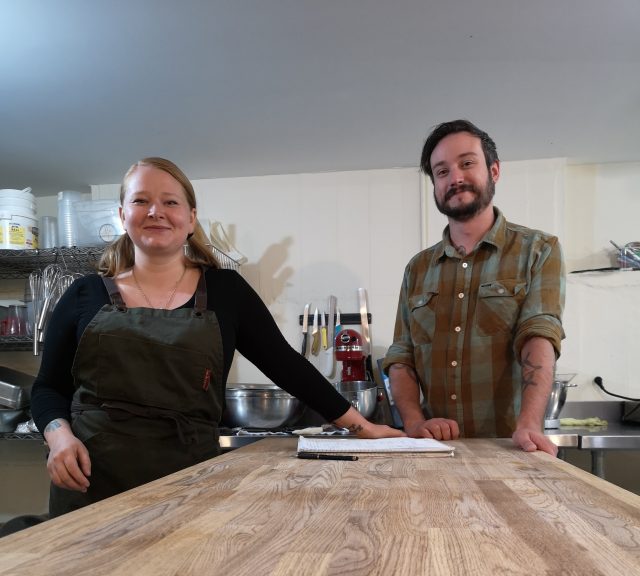 Whatever the applicable cliche and however lazily I’ve foisted it onto the situation, local cooks Andrew Thorpe and Emily Schlieper have arrived, in medias res of the thickening Covid-19 plot, at a relatively simple concept for their new business.

And it’s a delicious one because the two know how to cook, having honed their skills in area restaurants over the last many years: the pair have opened Clementine Catering KW as a response to the pandemic that changed, in many ways likely forever, our entire orientation within the food and beverage industry.

I will, however, disabuse you of the notion that this was a pivot. It has become a hackneyed term now and not fully at play in this case.

While it’s true the co-owners were laid off from the kitchen they both worked at in Kitchener — he as head chef; she as sous — due to the crush of economic factors rained upon local businesses by the coronavirus, both Thorpe and Schlieper have had designs on opening their own business, a dream likely on the back burner for many young chefs.

The small business — the two of them only — is based out of Ambrosia Corner Bakery (sidebar: Ambrosia owner Aura Hertzog should be presented with some sort of award for her indefatigable support of a host of local food businesses).

“It’s something we’ve had in mind for a long time,” says Schlieper. “Working for ourselves has always been a goal, so we thought what better time?”

Thorpe adds that the inversion of the restaurant industry certainly added a bit of stimulus to the idea.

Before any formal arrangements were made, the brand had received some exposure through a pop-up lunch they held at Ambrosia. They now share the space and essentially work around each other’s schedules in the kitchen.

Most cooks can make do with tight space and small kitchens: it’s always surprising what can be prepared in seemingly impossibly small areas with a dearth of equipment. “We can do makeshift,” says Thorpe in a sort of clarion call of cooks.

As for the name, Schlieper remarks that “it’s because my head looks like an orange;” you can read the earlier profile of Schlieper, though not of her rutacean-coloured hair here:

The food they prepare is what might be called having a retro vibe. “A lot of the inspiration for it comes from nostalgia, essentially. Meals that our parents made for us when we were growing up,” Thorpe says.

“But then a lot better!” Schlieper quips.

Food in just about any fashion can be a connector. “It’s how connected we were to that and much of an impact it made on us,” Thorpe adds.

That said, the food is approachable and accessible — souvlaki, spanokopita, xxxxx and xxxxx — but with an attention to detail and proper technical execution. “We try to hit the nostalgia on each dish,” Thorpe says.

The dishes for purchase are posted about a week in advance on the Clementine website. Go to the menu options and go through a couple of ordering steps. You get an email confirmation and can pay via an e-Transfer if you choose.

Then you head to Ambrosia for the pickup time you selected, either Saturday or Sunday, for curbside contactless pick-up and other physical distancing and sanitization processes.

Vegan and vegetarian options and other dietary preferences can be accommodated, Thorpe says.”We’ve started to do a grab-and-go breakfast sandwich on Sundays,” Schlieper says. “It can be crazy busy.”

Schlieper says they have between 40 and 50 customers a week, and numbers are growing. “We plan our menus in a smart way for easy service. The dishes hold well and travel well.”

The shift has forced a lot of businesses to re-think meals, service and delivery. “It’s not like a restaurant at all. We’ve said to ourselves on occasion: ‘Let’s not do that again,'” Thorpe says.

The fine tuning is working, it seems. Local support, adds Thorpe, has been phenomenal. “Other chefs we know have offered to help us out. Aura has helped us with the space.”

“She has been really flexible and super helpful,” says Schlieper.

There’s a bit of following, too, in the responsive Central Frederick neighbourhood where Ambrosia resides that has resulted in many repeat customers. “Some of them we know; some we don’t,” Thorpe says. “Word is getting out.”

Schlieper tells tale of a high school classmate visiting to try out the food. “I haven’t spoken to her in 10 years. They drove from Guelph. Pretty cool.”

Thorpe and Schlieper say the often get the inevitable question about being both life partners and business partners. “How can you work with your spouse, people ask us?”

“It’s always the same answer,” Thorpe says. “Cooking together is our favourite thing to do, so it’s easy to do. We support each other.”

That’s necessary in the close confines of a kitchen, no matter the personal relationships: getting prep done and stay out of the shit during a busy service takes a team effort.

“Well, I know I can be bossy,” Schlieper quips again. “Or should I say more authoritative? One of my strengths is organization and providing the structure for needing what we need to get done.”

Most difficult for the pair was the business components of the enterprise and having to wait for the city to get back online. “Websites and invoicing too. Neither of us has done any of that,” says Thorpe. “It was trial and error, and we’re still fine tuning.”

Restaurant work is demanding, but it can be fun too, as long as you love it.

“We get to do a lot of what we want for a menu but also seeing the positive reaction to what we are cooking on social media,” Schlieper says. To which Thorpe adds that comments and “likes” give a boost.

“There’s nothing more motivating than getting a message right after someone has eaten a meal and says it was the best they’ve had. It’s why we do this.”