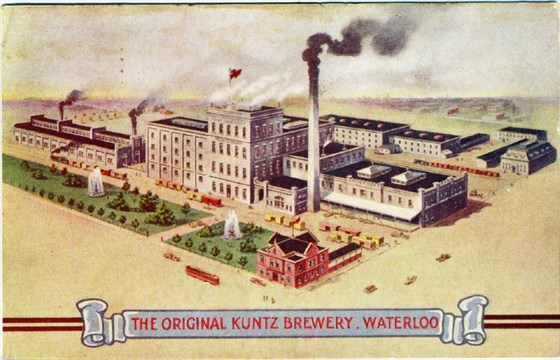 More than a century ago, Kuntz Brewery was operating in the 1840s in Waterloo. It eventually located to the space at the corner of King and William streets (currently a retirement home) before it shut down permanently in the late-1970s.

If history doesn’t repeat, but instead rhymes, Kuntz Brewery Limited is back in business — sort of.

Newly opened by Marty Schreiter, a local and the great-great-grandson of David Kuntz, the brewery has said in a press release that production “will remain on hold” until bars and restaurants re-open after the pandemic.

“Our friends in the hospitality sector have been very supportive of our plans,” said Schreiter, “and we wish them all the best as they have felt the economic impact of the pandemic harder than most.”

Schreiter, who founded the new brewery along with other craft-beer lovers, says the new beer will be made “in the spirit” of traditional lager.

“We had planned to launch in the summer of 2020, but the pandemic put our plans on hold.”

The press release states that while the original Kuntz Brewery was once the largest in Ontario, the new iteration has a different agenda, and one that “celebrates diversity” in the community, according to Schreiter.

“It’s about bringing people together, nourishing friendships, and making special occasions more special,” said, adding that, “when we can finally sit down with our friends and enjoy a beer at our favorite bar or restaurant, won’t that be special?”