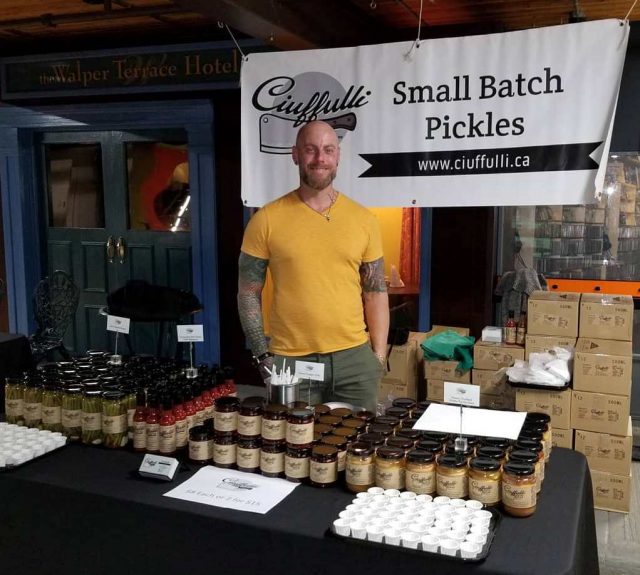 Chef Chris Sperduti sees a hard and defined split in the arc of his working life, one prompted by the moments of reflection and that took place when his father died suddenly.

“I was a roofer for 20 years, who then went to culinary school,” says the Brampton-born Sperduti of his career path and how his father’s passing prompted the change.

In the 1970s, and before he was born, Sperduti’s father, Sandro, owned a pizza shop at Yonge and Eglinton and a food operation in The Gladstone Hotel. “It’s still a kitchen at Gladstone. I went and did a stagiaire there so I could work where he once did,” he says, adding that he has many of his dad’s knives in his knife roll.

Sandro Sperduti died suddenly in 2011, and that was a moment of re-evaluation for Sperduti, then 31. “I decided that I had to get off roofs and do something I love, so I went to culinary school at Conestoga. I remember my father had talked about opening another restaurant or an Italian hot table. It just seemed natural, and I wanted to make his dream my reality.”

He graduated from Conestoga’s Culinary Skills – Chef Training (Co-op) program in 2014, having earned himself a spot on the Honour Roll. He also received the “Victorinox Award of Excellence” recognizing academic achievement.

The Hamilton resident, he is regularly involved with culinary events taking place at the College.

During his time at school, he worked at the popular Crazy Canuck, founded by a pair of Conestoga students. And in a rather unique series of circumstances, Sperduti’s last day of culinary school at Conestoga was his first day in the kitchen at the renowned Langdon Hall, where he was chef de partie on Jason Bangerter’s staff for about two years. “I learned a lot,” he says. “But it was intimidating. Even after my first full year there, I’d walk the long hall of the staff entrance to the change room and upstairs to the kitchen and still get butterflies.”

He did a stint as head chef at Guelph’s Sleeman Centre, where he led a crew of 25 cooks and other staff. A couple of years later, he helped Pusateri’s open a few new stores before deciding that he wanted to set up his own food business. That took the shape of Ciuffulli, in which he is the sole proprietor and a private chef with a line of food products such as sweet pepper jelly, fermented hot sauce with hibiscus flowers and others pickles that are currently in about 30 specialty stores and butcher shops, such as Charles Quality Meats in Waterloo.

“Ciuffulli means ‘grasshopper’ in the Ciociaro dialect of my grandfather,” says Sperduti of the Central Italian region that includes Lazio. His Ciuffulli products have won a dozen or so ribbons at competitions such the Royal Winter Fair. In this region, he was at PickleFest at THEMUSEUM this past November.

For the last two-and-a-half years, Sperduti has been focussed on the private chef aspect of his business, in which he develops and prepares menus to a client’s specifications. “It’s a lot of fun, and I find it rewarding,” he says. As he serves up some of his foods at events and demonstrations, he spreads the word about the wide range of cooking he can do.

Looking ahead, Sperduti says he wants a restaurant — “a small 30-seater” — at some point, but right now he really enjoys the more relaxed pace that his private cooking gig offers. “I’m not sure about the 80-hour week at a restaurant,” he says with a smile. “Sometimes I want to go fishing or foraging.” As he makes plans, he recognizes that his experience in the many facets of the culinary industry has seen him draw on his time at Conestoga.

“I can tell you that I have used every single thing that I was taught in that one year,” he says. “I already knew the basics of cooking, and I think I had a good work ethic, but I learned time management and everything from proper ratios, using a computer and writing menus to baking bread and icing a cake. I’ve used it all.”

“I can tell you that I have used every single thing that I was taught in that one year,” he says. “I already knew the basics of cooking, and I think I had a good work ethic, but I learned time management and everything from proper ratios, using a computer and writing menus to baking bread and icing a cake. I’ve used it all.”

Best thing you’ve ever eaten?
Chris Sperduti: A simple pizza bianca and prosciutto sandwich in Rome. They sliced an entire pizza bianca (pizza with only olive oil and a bit of herbs, usually rosemary, on it) in half like a bun and filled it with only prosciutto! Then they cut off a chunk whatever size you want. It melted in my mouth.

Other career you could have pursued?
Sperduti: Wind farm technician. I got accepted to that course also, but I chose culinary.

Chef you’d most like to meet?
Sperduti: Corrado Assenza from Caffé Sicilia in Noto, Italy (southwest of Syracuse).

Best footwear (for the kitchen or otherwise)?
Sperduti: Flip-flops.

Something that gives you great pleasure?
Sperduti: Fishing.

Do you ride a bike?
Sperduti: I ride a Trek hybrid bicycle and 2004 Harley Davidson Dynaglide trike, 1450cc.

A moment in your life you’d like to have back?
Sperduti: The moment I decided to be a roofer.

Who would you like to cook for?
Sperduti: My late father. His passing made me start this culinary journey.

The thing you wish for Waterloo Region?
Sperduti: A permanent food-truck parking lot where food trucks park all year round and get slammed at lunch time. Close second would be more bike lanes!

Best thing about being a chef?
Sperduti: Making people smile through food!

Most dumbest purchase you’ve ever made?
Sperduti: That’s the hardest question I have ever been asked. I can’t even answer it.

Would you describe yourself as sweet or savoury?
Sperduti: Savoury.