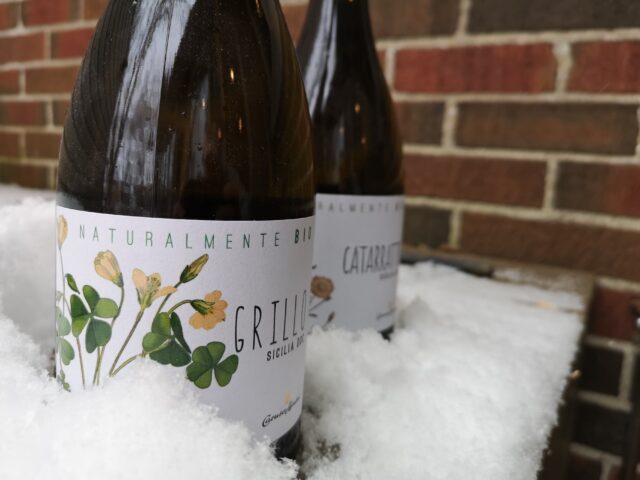 After teaching Conestoga College students about rind-washed cheeses one Sunday morning, Monforte Dairy cheese maker Ruth Klahsen dropped by to sample some Sicilian white wines and pair them with a trio of her cheeses.

Grillo and Catarratto, the wines sipped, were crafted by Caruso-Minini, based in Marsala, Sicily, making their wine at the furthest western point on the Island — and one only 600 kilometres from Tunis. Like the rest of Sicily, that fact helps give the island a truly complex and wondrous history.

The winery as a business was the result of a merging of the skills of third-generation winemaker Stefano Caruso with the marketing acumen Mario Minini in 2004. Their wines are now available in over 30 countries, with the Caruso daughters, Giovanna and Rossana, part of the wine-making team.

The family vineyards, Giumarella and Cutaja at a total of about 120 hectares in Trapani, give the Catarratto and Grillo their distinct terroir. Planted 450 metres above sea level, these white wines draw on the soil and the climate for their distinctiveness. (My nonna was born about 120 kilometres away from the winery, as the corvo flies, so I like to think I have a little bit of that terroir in me too.)

We started with the Catarratto, with which we ate Monforte’s Big Momma cheese. Not usually being a white wine drinker — I much prefer reds — I was impressed by these whites, especially how the Catarratto and Big Momma paired together.

So was Ruth Klahsen, who refers to her cheese as an ashed water buffalo double-decker that’s “a goddess.”

“I find this wine really fresh. The first nose I got was dandelions, like when you walk through a field of them,” says Klahsen who is, to my mind, one of Canada’s preeminent cheese makers.

“And look at the legs” exclaims Klahsen. “She’s kind of serious, right? She’s certainly not just a wussie, teasy girl, is she?”

I smiled at that description. It’s one reason I love Ruth, having known her for a decade now at least. As someone who works a lot with ewe’s and their milk, Klahsen sees the wine in the feminine. I like that.

She’s right. Muscular, sharp-edged Dionysus is the raunchy male god of wine, but I think wine, good wine that is, deserves a gentler touch, something more nuanced and multi-layered than Bacchanalian testosterone. So, I’ll take a cue from Klahsen and pick Demeter for her agricultural touch or Amphictyonis to give them a more subtle — and more enjoyable — feminine complexity.

It’s fitting, too, in the context of organic agriculture: the Demeter Association certifies wines and foods that are biodynamic, utilizing crop rotation, composting, and homeopatic sprays in order to “cultivate the long-term health of the soil,” according to the association.

Now, I didn’t quite get those dandelions — Klahsen likely has a lot more experience walking through them on her farm which gives her a wide range of sensory awareness — but I did get the freshness, some minerality and a pleasant viscosity in the body of the wine that I don’t often find in whites, along with a hint of lemon, the latter being something I adore.

“She’s substantial too,” Klahsen adds. “Like a Sicilian woman.” I have Sicilian background, but I don’t feel it appropriate to comment on this pronouncement, except to say that Catarratto is very popular in Sicily and does make for full-bodied wines.

“There should be magic with these cheeses,” is another definitive statement that Klahsen makes. And between Monforte’s Piacere, Big Momma and Paradiso, there was magic.

The pleasure in Piacere, a ripened water buffalo cheese covered in rosemary, chilli flakes and summer savoury, is that it also pleases the Grillo wine, itself with a savoury character.

Caruso-Minini wines were made organically from these indigenous Sicilian grapes, and the result is a controlled blending of flavours, I found.

With minimal manipulation, “naturalmente,” some wines can be wild and out of balance. “But not these,” says Klahsen. “They’re really disciplined and balanced and not out of control at all.” Paired with these cheeses, we agreed that they worked very well together.

“I think this is really good. Is there more?” Klahsen asks of the Catarratto. “There’s a herbaceousness in the cheese that just works.” The Cataratto finished a little longer than the Grillo, which nevertheless paired quite well with the cheeses.

The Paradiso, a semi-soft sheep cheese is soft and sensuous; “foxy” not raunchy, as Klahsen would say, and combined with the Grillo nicely. “These white wines work with these cheeses,” she states.

Ultimately, white wine and cheese pair very well, according to Klahsen and her palate. “Milk is neutral,” she says. “But these wines and these cheeses match.”

The take-away lesson here, from a Stratford Chefs School-trained cook as well as a cheese maker, is that wine and cheese can combine perfectly at a meal’s end if carefully considered, according to Klahsen.

“The cheese course near the end of a meal should lift you, not weigh you down,” she says. “You’ve had bœuf bourguignon, or something heavy and rich, and this lifts you back up and makes you feel giddy, bubbly and it dances a bit and it’s refreshing. These wines are some of the best I’ve had. They’re extraordinary.”

Both wines are available at the LCBO for under $25.