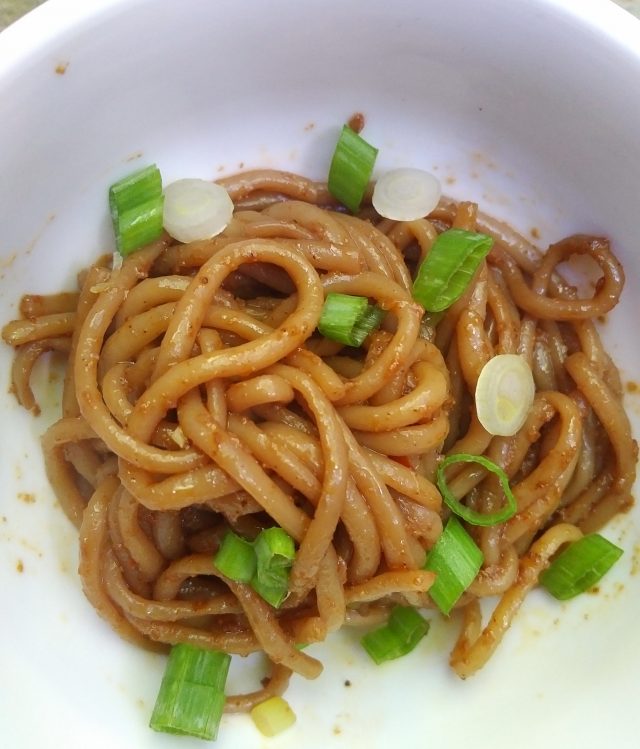 They’re probably not going to set the world – or your palate – on fire, but these humble noodles made from a root vegetable is pretty interesting. It offers possibilities for vegetarians and vegans and those averse to gluten in their diets.

Konjac (also known as konnyaku, konjac potato, voodoo lily or elephant yam, among other names) is an Asian plant that has been around for thousands of years. It started out as a medicinal plant, but eventually became so popular that at one time it rivalled rice as a foundational foodstuff.

A friend of mine made mention of it recently and then, coincidentally, I saw a Tweet about it by a Toronto chef. The notifications forced me to investigate.

The bulb, or corm, of the konjac (pronounced “cone-yack”), which can actually weigh up to three or four kilograms, has been used to make a flour for noodles as well as in other food applications, especially as a thickener and emulsifier.

As well as being gluten-free, it’s virtually carbohydrate-neutral. But then again, konjac has neither protein nor fat: that means it’s up to you to add the flavour, therefore.

Konjac is used to make what are known as shirataki noodles, both wet and dry, for instance, that you will find at Asian markets and in specialty food stores. I have found these at conventional supermarket chains.

I prepared the noodles with some Asian seasonings and spices such as five-spice, a garlicky chili paste, some soy sauce (which gave the white noodles a richer colour), a light dosing of sesame oil and some chopped green onions.

They turned out not too badly, though there is a just slightly elastic texture that might take getting used to. Then again, that’s exactly the same texture you get with something like a dish of what are known as glass noodles at any local Thai restaurant.

At the end of the day, konjac noodles are an interesting tabula rasa, a blank slate, due to their neutral taste: they absorb the flavours they are cooked with, so that gives you a wide open and delicious field to play in.