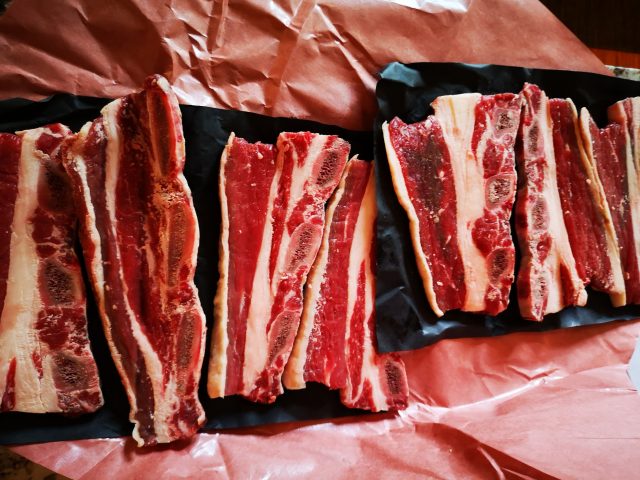 You can usually find it on a few menus in Waterloo Region (Onnuri, Korean BBQ, Busan, Seoul Soul): galbi or kalbi.

The five or so millimeter-thin beef then gets a good quick and hot grilling to produce some nice markings and a bit of tasty char-broiled deliciousness that is a bit salty and a bit sweet.

The short rib-cut itself – also referred to as flanken – is a thin strip of beef cut across the rib to form oblong “buttons” of bone rather than cut parallel to the bone like a traditional beef rib that you might get at a southern barbecue joint.

The best thing is how simple it is to prepare. You can find short ribs at the local butchers at the Kitchener Market and the other ingredients at K-W Korean Food Market (where there is also great kimchi) in the plaza on King Street just adjacent to Breithaupt Street near Google.

The preparation is simple: combine the marinade ingredients (I also added a bit of Korean gochuchang chili paste), pour it over the short ribs in a large dish to cover and let it marinade in the fridge over night.

The next evening, bring the ribs to room temperature for 30 minutes and then grill them about three to four minutes on each side until you have some nice char. Garnish with toasted sesame seeds and thin slices of green onion and serve with rice and kimchi.

But … if you don’t want to make it, find galbi at an area restaurant and order it from them!