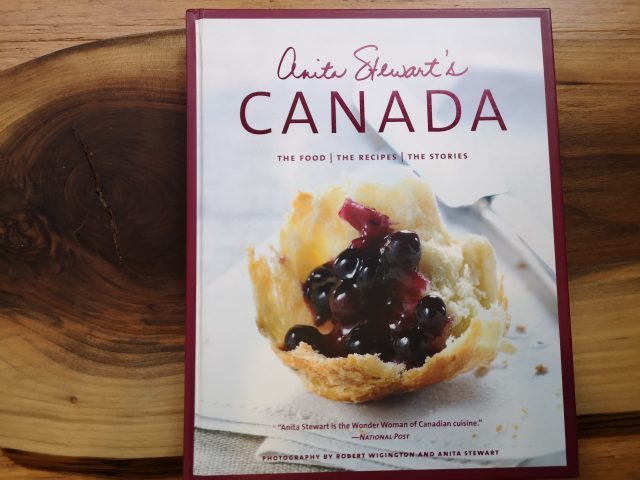 I had the good fortune to know Anita Stewart. She passed away yesterday too early.

I got the chance to talk with her several times a year about Canadian food. We met at a few area restaurants like Uptown 21 and Borealis Grille. She was an inspiration and a tireless and dedicated advocate for the foods of Canada and the idea of local. You could always feel her passion when she spoke about “the original palate,” the three sisters, the Ukrainian community in Canada and their food and Canada’s (and the University of Guelph’s) Yukon Gold potatoes.

She gave me many opportunities to pursue stories and gave feedback and insight and commentary on topics I was writing about; she gave me the chance to meet other giants, like her — including David Suzuki at Borealis.

For a few years, a while ago, I had a radio show about food: Anita came on the first time — it would have been 2009 — and brought me a copy of her book (one of several she wrote), Anita Stewart’s Canada: The Food, the Recipes, the Stories. The work on those printed pages truly captured the essence of who she was.

But who she was I also learned on a subsequent visit to the studio, some time after that. As we spoke on air, I flipped through the pages of the book looking for a bookmarked page to ask her about. Stewart at that moment showed her wry sense of humour and her quiet and self-deprecating demeanour.

She said, in dead-pan delivery, “Well, I can see by how clean and neat the book is that you don’t cook from it often enough.”

Busted … by Anita Stewart. It was a very funny moment, and she smiled looking over the top of her glasses. I will remember that delicious wise-crack for a very long time.

Godspeed Anita. Memories of you will be our blessing!

Below is a transcript of a conversation Anita and I had a few years ago for an article for a major Kitchener-based food supplier that I wrote. If you didn’t know Anita, I hope it gives you some idea of her contribution to Canada’s food landscape in this brief glimpse.

[From July, 2017]
Anita Stewart is an author and food activist and for her service to and expertise in gastronomy – especially regarding Canadian cuisine – she has been named a Member of the Order of Canada as well as having been installed as Food Laureate of the Ontario Agricultural College at the University of Guelph.

However, Stewart’s contribution to food in Canada is also deeply rooted in the grassroots of what the country is when it comes to the food of everyday life. As founder of the nation’s food celebration “Food Day Canada,” Stewart is dedicated to defining and promoting Canadian ingredients and food from coast to coast to coast.

With the upcoming Food Day Canada celebration slated to take place on August 5 – and during this the year of Canada’s 150th birthday – I had a chat with Stewart.

What is “Shop Like a Canadian”?
Anita Stewart: As Food Day Canada approaches and in honour of Canada’s 150th  birthday, we’ve selected 150 ingredients to help us all Shop like the Canadians we are.

And those are products grown or raised by Canadian farmers and prepared and packaged by Canadian food companies?
Stewart: Yes. We’ve been looking forward to this for a couple of years now. The shop-like-a-Canadian ingredient list is the big one from my perspective. We’re challenging restaurants from coast to coast to take a look at those ingredients and build a dish. Post it and do the Instagram, Twitter and Facebook thing. Hashtag it Food Day Canada. Really, my goal is to create a visual album, if you will, of the ingredients and the people who are doing good things coast to coast to coast. It’s going to be a lot of fun and really interesting to watch.

You even have some chefs aboard the “Canada C3” icebreaker that is making an historic journey around the 23,000 kilometers of our coasts. How Canadian is that?
Stewart: The ship is travelling for 150 days around all three coasts. We have 11 Food Day Canada chefs on board on various legs of the journey. They will be cooking for the ship’s crew and the guests on board. I’m trying to arrange meeting the ship in Campbell River, BC. Jamie Kennedy and will be boarding and will be the final chef to Victoria. It’s a pretty cool thing.

Recently, you were keynote speaker at Terroir Symposium this past spring. What are your impressions of the state of “Canadian cuisine” after participating?
Stewart: What I see is that things are pretty diverse, actually, and it is pride-filled, for sure. That’s nice to see. The thing that I’m noticing is that younger chefs really get the idea of Canadian ingredients. It’s funny because the goal for me is to work myself out of a job! I don’t want to do this. I don’t want to have a soapbox all the time. I want chefs to see what they’ve really got here and they are seeing that.

The country is at 150 years but there’s much, much more to its past when it comes to First Nations people and food. How do you see that?
Stewart: Absolutely. They have food traditions which in some ways are more fluid than ours. As settlers arrived, they brought their own seeds and had their own ideas of what food was. They saw what they thought was a barren land and no agriculture to speak of particularly. The reality was there was a lot of agriculture happening here. The peoples of the plains moved to their food sources whereas when you have more settled areas – such as what became southwestern Ontario – people settled at the food sources. There was a huge food tradition there, but it was still very foraged.

And the idea of recipes?
Stewart: I laugh when I hear about people asking where are they going to get First Nations recipes? Well, there wasn’t such a thing. There were methods, and that is what is so exciting, and foraging for plant foods and animal foods, which of course happened from coast to coast to coast.

What about food and sustainability?
Stewart: That’s a massive question and the answer is quite broad. Of course, in our past, if you didn’t sustain your food sources as indigenous hunter-gatherers, you simply died. So you had to sustain those food sources. It was a matter of survival, and in some cases it didn’t work. People did starve to death.

And what about now?
Stewart: As for how things are happening in 2017, the whole idea around foraging and harvesting the wild has become much more front-and-centre for many chefs and even home cooks. But we have to be really cognizant of the fact that we could wipe out whatever it is we are going after unless we really are careful. I mean you see people with shovels going in for wild leeks – that’s not sustainable. Frankly, when I see them in a local grocery store, I’m horrified. That to me is just not sustainable at all. But if we’re careful and respectful, we can do it really well.

Done properly, can it help define something that might be called “Canadian cuisine”?
Stewart: We have so much. That can give us a point of differentiation of our cuisine no matter where we are in Canada that no other nation can emulate. It’s ours!

How is local doing? Do we take it for granted?
Stewart: It depends on who you are talking to. Some people are very conscious of it. But at big grocery stores, there’s a lot of smoke and mirrors there. It’s coming, however, and we still need to push for that.