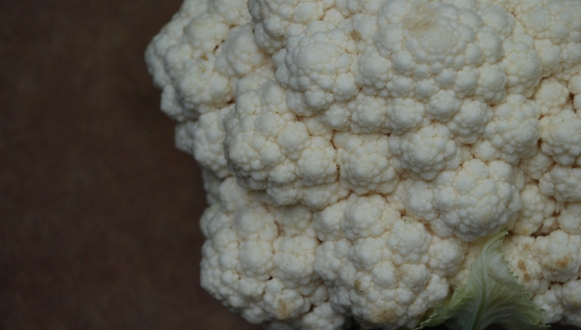 Cauliflower is a cruciferous vegetable closely related to broccoli despite the colour contrast. It sets off memories and wise-cracks about costs that once climbed to $12 and sometimes more. Pretty pricey for a pretty humble head of veg.

It has ascended the heights as a “hot vegetable trend” which helped cause cauliflower prices to spike dramatically: per pound, it was the same cost of some organic, pasture-raised beef.

Botanically, cauliflower and broccoli are different cultivars of the same plant species – Brassica oleracea, form botrytis – but cauliflower was originally picked before the flowers could open and a cauliflower “head” formed: what you are eating is essentially flowers before they mature.

A fussy crop to produce, growers cover cauliflower plants so that a lack of sunlight inhibits colour pigments, a process called blanching; the result is that the heads will be their familiar yellowy white colour, though there are green and purple varieties. The entire curd is edible, as are the leaves though they have a stronger taste.

While humans have eaten plants since before recorded history, cauliflower, broccoli and Brussels sprouts are relatively new to the human palate. In the 1500s, vegetables were considered fit only to be animal feed.

By the 17th century, vegetables like cauliflower began to garner more attention from French chefs who prepared it for Lent and Catholic fasts when meat was prohibited. A traditional cauliflower dish during Shakespeare’s era was “colleflower and sippets” (essentially toast points).

Some fruits and vegetables can benefit from a gentle pre-cooking to maintain their crispness – cauliflower is one of them. By pre-cooking the curds, starting in cold water, to a temperature of about 135-degrees F. for about 20 minutes, the cauliflower, by virtue of chemical activity, is more resistant to breaking down when cooked at higher temperatures. This can be useful when making a stew or a braised meat dish.

Perfect for roasting or a purée

One of the great attributes of cauliflower – by virtue of its non-fibrous, undeveloped flowers which are rich in pectin – is its receptiveness to the purée technique. By cooking the curds very soft, the tougher cell walls are broken down and the thickening agent pectin is released.

The classic Milanese preparation has been forgotten, unfortunately: gently cooked pieces of cauliflower are cooled, soaked in beaten egg and grated Parmesan, dredged in bread crumbs and fried in butter.

Similarly, the traditional garnish “à la Du Barry,” is named for the (eventually guillotined) mistress of French King Louis XV: florets of cauliflower are covered with Mornay sauce and sprinkled with grated cheese and breadcrumbs before being browned under the broiler.

Otherwise, high heat is the key to roasting whole heads of cauliflower. Trim cauliflower and drizzle liberally with olive oil, season with salt and pepper and whatever spices you would like, cover and bake in a 450-degree F. oven for about 40 minutes. Remove the cover and continue cooking for another 20 minutes until it is browned and cooked through.

Cook two medium heads of chopped cauliflower in a few tablespoons of oil until soft. Add finely diced onion or shallot and season with salt and pepper.

Cool and stir in 10 egg yolks one by one and incorporate. Season as needed. Strain the purée and pour into ramekins.

Cook at 275F. until set but centre is slightly jiggly, about an hour. Remove and cool. Sprinkle coarse sugar evenly on the top of the brûlées and torch to dark brown.