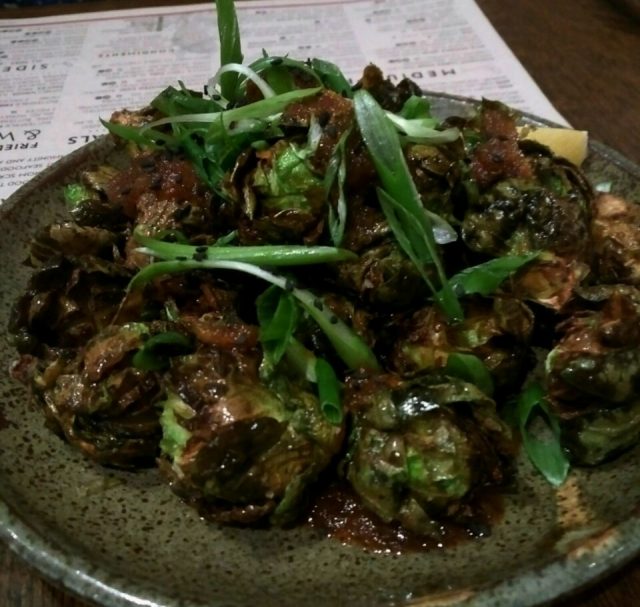 When chef Ryan O’Donnell’s seven-year-old niece visits Mercer Hall from London, Ont., she sees the “Welcome to Stratford” sign on the road and says, “I can smell the Brussels sprouts!”

That a seven-year-old loves the tiny cabbage-like member of the brassica family is testament that it’s a dish you shouldn’t skip.

“It came from our desire to use Antony John and his Spoiled Reputation Brussels sprouts. We put them on the menu two years ago,” says O’Donnell.

The customers loved them and because of its quick preparation it was good for the kitchen too.

“From a work-flow perspective, it was quick. A sautéed Brussels sprouts dish we had done earlier was great, but it was too labour intensive because we were picking all the leaves.”

The current dish makes use of the whole sprout and needs only a quick cleaning and a couple of cuts along the top.

“I’d cooked a lot of Brussels sprouts with bacon, sriracha and maple syrup for a sweet and hot combo that works really well.

John’s produce shows up on several menus in Waterloo Region, but the menu at Mercer has a decided Asian flavouring, the result of O’Donnell having lived and cooked in the Far East. That means karaage (fried chicken), steam buns, dumplings, curries and a tuna sushi roll.

The other menu quality that is appealing is the number of small and medium plates that you will find at Mercer: making sampling many flavours and textures a delight—including the improbable “spider dogs off the grill.”

Mercer makes its own kimchi, the hot element in the Brussels sprouts dish, and the maple syrup is replaced by honey. “We puree it, so it’s a kind of kimchi-honey sauce.”

The sprouts get a squeeze of lemon juice, sesame seeds and some slices of scallion, and the plate is served. “Put it all together, and it was pretty much telling us that it was working well,” O’Donnell adds.

The kimchi gives the dish umami, so I found it went well with beer.

“It has all the elements. Sweet, savoury, some spiciness, and the deep-fried element,” O’Donnell says. “It hits all those impulses.”

Technically, creating the dish is a simple matter of slicing the top of the whole sprout in a criss-cross: it opens up and “blooms” when it hits the deep fryer.

“The cuts help the inside cook more quickly and gives a crispy texture. It takes the sauce better too,” says O’Donnell.  There is a touch of fish sauce in the kimchi, but I would imagine that the Mercer kitchen can make a vegetarian version; whatever category it fits into, people loved it when it first appeared on the menu last year, according to O’Donnell.