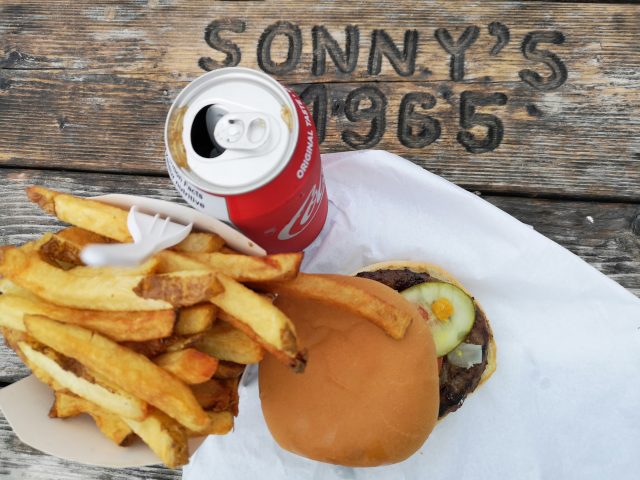 Yesterday, it was announced that Sonny’s is for sale. The famous late-night burger joint has been a fixture in its Waterloo location since the mid-1960s. It’s therefore fitting to re-post this story about Sonny’s long-time Thursday burger special on this Thursday.

[Previously posted] The sign for the “Thursday burger and fries special ($8.79)” has been in the window for a long as I can remember. The newer rectangular patch in one corner indicates the special hasn’t changed; it’s the price that’s been updated.

Sonny’s Drive-In has been pretty much the same since 1965. It was drive-in burger and fries joint back then, and it remains that today.

Bob Gouvanis and his late brother George owned and operated Sonny’s from 1970 until about a decade ago when restaurateur Paul Noussis bought it. I remember Gouvanis at the cash register as we stood in rambunctious lines late at night – and how he once slowly pulled a baseball bat from beneath the counter to make a quiet point about the rowdiness.

A lot of Sonny’s is nostalgia, and Noussis has maintained status quo the last ten years – including good drive-in burgers.

“We haven’t changed very much,” he says.

There’s the ledge for stand-up eating that runs along the front window; there’s a few missing lights in the row of bulbs along the underside of the roof. There’s still angle parking and Coca-Cola signs and old menu boards.

There’s the chubby kid in the logo holding a plated burger, and the “famous” hotdog and the bags of potatoes stacked and ready to be French fries. There’s the back door propped open revealing the screen door when you drive around the back to exit.

The menu is built around Sonny’s classics, including fish and chips popular on Fridays. The burgers, onion rings and milkshakes are classic late-night fare.

Sonny’s “hamburgs” are now from Toronto’s The Butcher Shoppe and are char-broiled, as the historic brown and orange pylon sign exclaims. They’re grilled over briquettes for flavour, according to Noussis. “It makes the burgers juicier. We tried the flat-top, but it wasn’t the same.”

If there is anything that is a sign of the times, it’s that Sonny’s now serves a Beyond Meat burger. “A lot of people were asking for that option,” says Noussis. But there’s also sausage and a steak or fish on a Kaiser, as well as scallops and fries (at $12, the most expensive menu item).

The condiments and toppings are straightforward and lined up in bowls in true-to-form burger-joint style, from diced onions to slices of dill pickle. “There’s nothing fancy,” Noussis says. “We only added lettuce a few years ago because people were asking for it.”

You’ll see the potato rumbler for peeling the 20-kg bags of spuds; Sonny’s goes go through about 50 bags a week. Cut fries are blanched, cooled and get a final fry for serving: they taste like fried potatoes, fluffy inside, rather than fried oil. “You can tell the difference,” Noussis says.

The busy streets around the restaurant with its large parking lot and a half-dozen or so picnic tables is quite different than it used to be; restaurants and the food that people want to eat are different too.

“The times have changed,” Noussis acknowledges.

But not Sonny’s Drive-In.