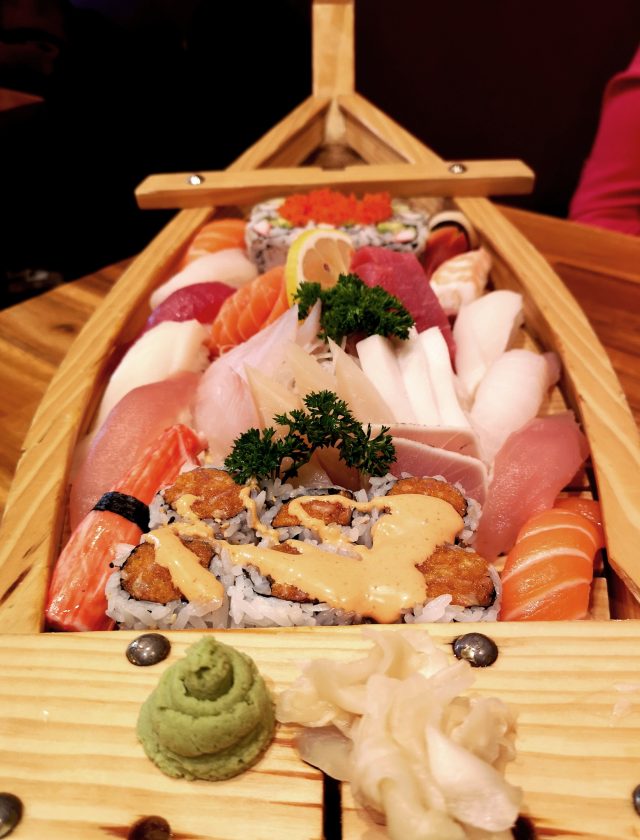 My first visit to Ken Sushi House, ensconced in “Blair House” within the newish high-rise University of Waterloo dorms on Phillip Street, was in early 2019. It seems a lot has happened since then.

One such phenomenon has been that Ken Sushi has established itself as the premier venue for sushi and sashimi in the area. And rightly so: it’s very good.

Space has been reduced for physical distancing, but Ken Sushi is open daily, with a brief closure between lunch and dinner service.

[published previously]
With Valentine’s Day arrows launching this week, it only makes sense to get on a love boat – the “Love Boat” at Ken Sushi House in Waterloo, that is. The dish tingles and excites.

Ken Sushi House features another type of love: the care of preparation for this ritualistic food that is really the essence of sushi and sashimi ardour.

“I keep the ingredients fresh, first of all. I buy only the best, and prepare it as if I’m making it for my family. If I have some fish delivered that I don’t like, I don’t accept it,” says Ken Sushi House chef and owner Ken Yim.

Yim opened the 45-seat restaurant in September, 2016, coming from Toronto where he had previously operated a sushi restaurant.

A regular Toronto customer from as early 2001 eventually came to develop the property where Ken Sushi House now resides, and he asked Yim to open a restaurant. “He said there’s not a good sushi restaurant in Waterloo, and that I could offer something to the area,” according to Yim.

That Ken Sushi has come to mean premium quality is the general consensus of area diners in evaluating Yim’s preparations: the lightly vinegared and slightly warm rice, the fresh, cool slices of fish, the delicate, refined morsels gently handled and shaped by the kitchen, rather than the slapdash, desultory preparation of too many AYCE venues.

The dish comes on a boat-shaped apparatus that is basically every ingredient that the restaurant has, except for uni, otoro and some other more expensive pieces. “It’s a good variety,” Yim says.

That includes delicious salmon, blue fin tuna, yellow tail, albacore, shrimp and surf clam and others, with a dollop of wasabi stimulation and cooling pickled ginger.

In total, there are likely 200 items on the menu, including three other boats that sail to sushi ecstasy: Waterloo, Deluxe and Titanic – the latter includes the Brobdingnagian proportion of 120 pieces (for $147), inspiring a delight of sushi satiety.

Such is it that when I see these numbers, I wonder how there ever is enough fish in the sea. It’s something that Yim is careful about and respects, you can tell. “The fish is God’s gift,” he says.

Indeed, sushi love is a many splendoured thing.

Note: You may have to search for Ken Sushi among a series of ground-level stores with student residences towering over head. There is some parking behind the Blair House with access up the driveway on the north side.