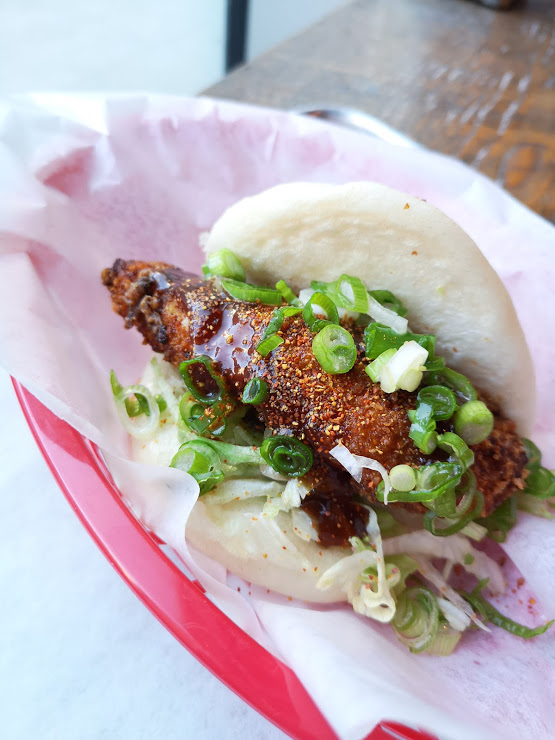 [Previously published] It’s a hidden gem, if there ever were one. In fact, Bao Sandwich Bar is virtually impossible to find.

Tucked into a subterranean space, and metres below grade of the parking lot of a student dorm and apartment behind the Lazaridis School of Business and Economics building at Wilfrid Laurier University, Bao Sandwich Bar is, regardless of its concealed nature, very popular and has been since it opened about four or five years ago.

Inexpensive and delicious, Bao’s bao steamed buns and banh mi (Vietnamese baguettes) sell by the dozens and dozens each day.

The entire business, cloistered as it is, has grown by virtue of a kitchen being able to churn out hundreds of eminently edible sandwiches that cost less in the $10 – $12 range.

The bao is made from a traditional dough recipe that includes a bit of sugar to give it a slight sweetness. Rolled into a sphere larger than a golf ball, the dough is proofed, shaped into an oval and steamed at service.

It then becomes the delightfully pillowy envelope for pork belly, beef, fish, duck and even crispy breaded avocado.

Among Bao’s two chicken dishes, the katsu is a good example of how, given the frequently bland nature of a chicken breast, our most common poultry can rise from mediocrity to something worth experiencing — even if it is only $5 or $6 to begin with.

This chicken is phoenix rising from the concrete subterranean depths of student housing, and it’s simple at the same time that it conjures images of another kind of food that is a hand-held bite to eat from a world away.

Japanese-style fried chicken, the katsu is slathered with a garlicky mayo, tonkatsu sauce (which is sort of like Worcestershire and often accompanies a pork cutlet) and seasoned amply with flakes of togarashi, which come from a small Japanese chili pepper. Added to the dish are a handful of scallions sliced on the bias.

The individual ingredients themselves are interesting enough, including their heroic sounding and exotically poetic names tonkatsu and togarashi, but, nestled neatly inside a bao with a slight portion of seasoned crispy chicken poking out, something extraordinary happens.

What you get is a pleasant contrast that makes the bao simply delicious and satisfying: it’s at once cool and soft and hot and crispy with juicy chicken and the rich, drippy sauces.

I would guess that you could probably be satisfied with one, but I’ll wager that at the price it’s pretty easy to scarf down two.