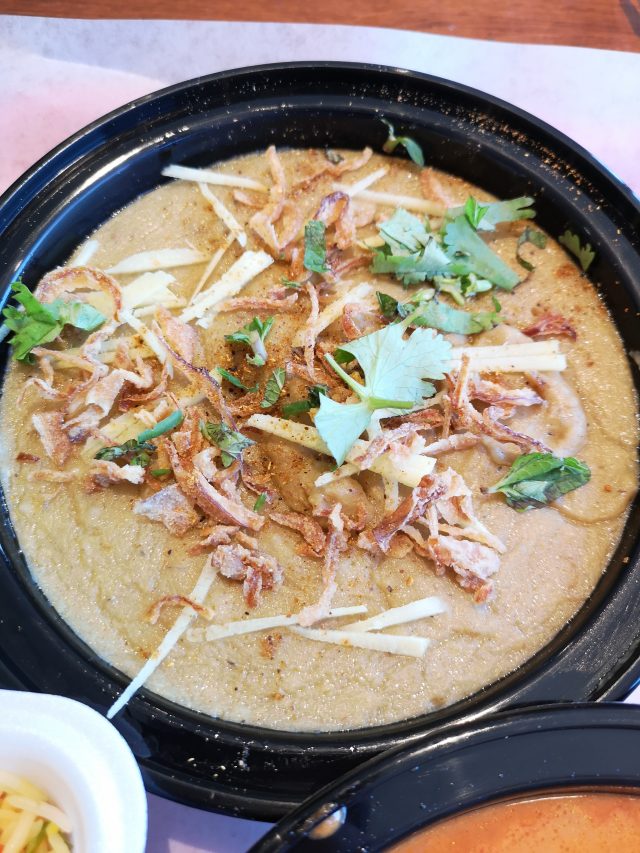 [Previously published] Indian restaurants dot the Waterloo Region serving variations of butter chicken, curries, samosas, biryani and naan. The dishes, for the most part, are familiar.

Haleem, however, is a less familiar dish I discovered at Urwa’s Pakistani & Indian Cuisine in Waterloo, just near where King and Weber streets, having run parallel to each other for several kilometres, suddenly intersect.

The intersection is also that which finds Pakistani and northern India food intersecting in this type of “stew” that appears among the beef curries on Urwa’s menu.

Often made with lamb, Urwa’s beef version assumes a texture akin to a porridge or even a fine-grained polenta – and soft concoction that just demands to be eaten with a nice portion of warm naan.

In general, the beef is cooked low and slow, in some recipes for up to eight hours, along with dhal (pulses and legumes), lentils, urud dal (a sort of black lentil), cashews and whatever the spice of the region dictates.

At Urwa’s, a small restaurant that has been open in the small plaza for about six months, the haleem carries with it undertones of lemon, ginger and is green onions.

The flavours are good – complex and rich and earthy – but it is the texture which sends haleem into a different experience. In much of North America, there is a range of textures that are considered part of the palate – but one that is very Western-centric.

Chew on tapioca balls that bob around in bubble tea or beef tendon in a bowl of pho and even some noodles that have been bathed in a lye solution (such as those in downtown Kitchener’s new Crafty Ramen), and you experience a sort of “gumminess.” I find it quite enjoyable, though it isn’t so for everyone.

The texture of a bowl of haleem is polenta- and porridge-like. But I find the flavouring complex, evocative and, really, quite soothing (I have to disclose a love of porridge and polenta, however.)

Other dishes include the usual Indian fare such as tikka masala, tandoori chicken and korma. The aloo tikki, a small fried croquette is delicious if not a bit too oily, and the biryani ($4.99) is very fresh and brilliantly coloured.